Dear, oh dear. Inflation. It really is funny sometimes, isn’t it? Sometimes people get excited – over excited, and then bawl out ridiculous figures for clubs to ponder in the process of bidding for a player, and whoever was bidding for Udinese’s Alexis… 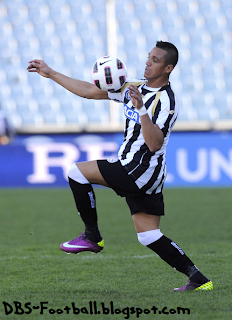 Dear, oh dear. Inflation. It really is funny sometimes, isn’t it? Sometimes people get excited – over excited, and then bawl out ridiculous figures for clubs to ponder in the process of bidding for a player, and whoever was bidding for Udinese’s Alexis Sanchez will have had a nasty shock recently.

The Udinese Preseident, Gino Pozzo has gone all ridiculous, and stated that his player Alexis Sanchez is worth way more than the £30 million that has been offered for him, but the Chilean winger is worth as much as the best player in the world, Lionel Messi. He said:

“To me, Sanchez is worth as much as [Lionel] Messi. That’s just my personal opinion, though.”

“It is very hard to find any other players of his level. We have received an offer of €35m for him, but we rejected it. I think that he is worth more than that.”

It prompts the question; how much is Lionel Messi worth? Well, at today’s standards, with Ronaldo going to Madrid for £80 million, you would think at least that price, probably more. Barcelona of course would not consider selling him for anything less.

Now to the question of if Sanchez is as good or as effective as Lionel Messi. Most of you who watch football would immediately say ‘no way’, which is supported well by the figures. Sanchez has scored 12 goals this season in the Italian Serie A, whilst assisting 6. Messi meanwhile, has been very busy in the La Liga, scoring a massive 31 and assisting 18, having played only 2 games more than Sanchez.

Manchester United and their local rivals City have both shown an interest in the 22 year-old Udinese winger, but United will most certainly be put off by the astronomical figures quoted. Sir Alex Ferguson most certainly has at least £30 million to spend, but with a new goalkeeper and central midfielder Manchester United’s prority, he will be in no hurry to spend over £30 million on a winger.

Nani, Valencia and Park occupy those positions well enough, whilst the twins Fabio and Rafael could easily play further up field if back up is needed. City on the other hand will spend as much as their heart desires, and with a bottomless pit of money occupying their eyes, their hearts will be pumping fast at the prospect of big money signings, even if they aren’t needed.

Conclusion? Sanchez isn’t worth as much as Messi, the Udinese President thinks he is, a club would have to put in a bid of at least £35 million to even be in with a chance of agreeing a deal, Manchester United won’t spend that much and City will do what they like. So, if Sanchez goes anywhere in England, it could only by City, unfortunately.