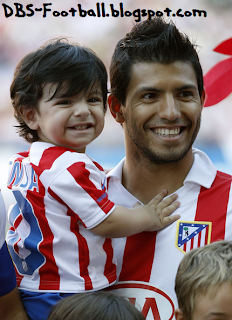 Arsenal will be having a “very active” summer transfer market according to the manager Arsene Wenger. The window hasn’t even opened yet, but apparently Arsenal have already signed Ricardo Alvarez in a pre-contract agreement from the Argentinian club Vélez Sársfield.

Add that to countless other rumours circulating, linking Arsenal to players such as Bolton’s Gary Cahill, Blackburns Chris Samba and PSG’s Mamadou Sakho, and you see a pattern developing. Defenders are the priority, and Wenger, although cauious with how much he spends, said:

“The market will be hyperactive because everyone believes financial fair play will happen soon,” Wenger said, referring to Uefa’s tighter regulations on club spending. “So we are quickly doing the last buying before the stores will be closed. And for the first time for a while, I will be very active, too.”

A player whom Arsenal would no doubt love to have leading their line is Diego Maradona’s son-in-law, Sergio Aguero of Athletico Madrid. He is of Athletico for now, as he recently confirmed like Bendtner that he will be looking for a new club in the summer. I suspect he would cost too much for Arsenal anyway, but the 22 year-old is not short of admirers.

Liverpool, City and Chelsea have all been linked to him – and they are only from the Premier League. Real Madrid are apparently early favourites for the Argentinians signature. He is a fine finisher, scoring 20 League goals this season for Athletico, while assisting 2. Aguero said:

“I said long ago that when I wanted to go, I would say so publicly. And the time has come.”

“So I keep to my word and here I am. I find it hard to leave Atletico. It hurts and saddens me. I’ve thought long and hard and I am convinced that I must be true to myself.”

“I do not think I put a ceiling on the ability to keep learning, to keep growing. After five intense years, this stage for me personally is over and I have to give way to a new one.”

“I’m about to turn 23 and I have everything before me. Suffice it to say that this is not an economic issue but strictly a sporting one. So I want to clearly express my appreciation to the club for the efforts they have made for giving me a salary that equates with the largest clubs in the world.”

Meanwhile, the biggest game of the year is fast approaching, as Manchester United and Barcelona prepare for their Champions League final at Wembley. In light of recent off-field events however, regarding Ryan Giggs, Sir Alex Ferguson was said to be “beside himself with anger” at the alleged revelations.

Some said that Giggs feared for his place in the Champions League starting line up for United, but the Daily Mail have just reported that Giggs will in fact start the massive game. United could win their fourth Champions League trophy – Sir Alex’s third, and these sorts of distraction are most unwelcome.

Hopefully, Giggs will continue to do what he has done for his long, fruitful career, and be fully professional throughout, to set an example as always to his fellow players. United will have a supremely tough test on Saturday, and they need all the togetherness and quality they can muster.