Arsenal manager Arsene Wenger may finally make that big name signing that many have been crying for for a while. He has already confirmed that Arsenal will be having a far busier summer than usual in the transfer market, but now he has, somewhat&n… 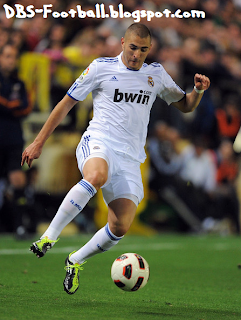 Arsenal manager Arsene Wenger may finally make that big name signing that many have been crying for for a while. He has already confirmed that Arsenal will be having a far busier summer than usual in the transfer market, but now he has, somewhat uncharacteristically, gone ahead and named the player he wants.

Karim Benzema is that player, a player who is owned by Real Madrid and who was bought in 2009 for €35 million. Wenger may be interested in Benzema now simply because the 23 year-old Frenchman only has 1 year left on his contract and could go for as little as £7 million.

If Wenger can somehow persuade Madrid to let go of Benzema for as little as £7 million, it would be an absolute bargain of a buy, and Arsenal fans would surely be appeased for the time being. Wenger said:

“Viewed from the outside, signing him does not seem impossible. He’s a player that I like.”

“He’s intelligent in his movement, he is capable of combining well with others and making a difference, and of doing individual moves as well.”

Benzema has scored 26 and assisted 9 goals in 48 appearances for Madrid this season and has settled down well after a poor first season in front of goal at the Bernabeu.

Consider Arsenal’s current crop of players and how much they cost Wenger, and you would be impressed. Robin van Persie cost as little as £2.75 million from Feyenoord in 2004 which was a fantastic deal in hindsight, taking into account the 95 goals and 53 assists he has collected in just 230 appearances for Arsenal.

Samir Nasri was also a bargain in today’s market, with Arsene grabbing him from Marseille for only around £12 million while Tomas Rosicky cost Arsenal a reported £7 million from Burussia Dortmund in 2006 when he had cost Dortmund a Bundesliga record of £18 million five years earlier.

What I am trying to say is, although Wenger has been criticised many a time in the past for his reluctance to spend, it is often because he has a knack of grabbing very good players on the cheap. Of course, he has let a few key players slip through his fingers because of this policy, but it seems with the confirmation of the Benzema interest, he is making some progress in the transfer market – something that can only be pleasing for Arsenal fans.