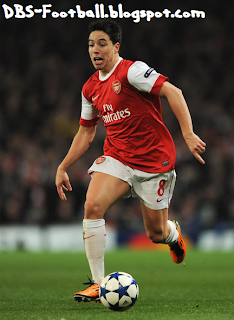 Arsene Wenger will be working this summer to bring in some key players for next season. He has said that it will be a “very active” transfer window for his club, and it will surely be one where he will bring in some established footballers who can make an effective difference in the side, rumoured to be Karim Benzema or Radamel Falcao.

However, Wenger will also have to fight on another front, and on a front which is arguably just as important if not more; he needs to keep the current key players in the squad. Among the annual rumours of Cesc Fabregas packing his bags and leaving The Emirates, there are also those who are worried about the future of another key player, Samir Nasri. A new contract is yet to be signed, and with his current contract expiring in just a year, Wenger needs to act quickly to avoid him leaving on a free transfer next season.

Apparently, the deal on the table that has been offered to Nasri is a five-year deal in the region of £90,000-per-week –  but the player is stalling on the signing of it.

Naturally, when a deal is yet to be done, the player will be linked to other clubs, and clubs who are looking for a player in a similar position for the future. As a result, the predominant rumour circulating is that Manchester United will make a move in the summer to bring the 23 year old midfielder to Old Trafford.

Sir Alex Ferguson has been given a significant or “substantial” transfer fund this summer by the Glazers and the figurative nod being given to the United manager to spend big. It would certainly be imaginable and possible that the Scot would be interested in signing Nasri. The attraction of, as Patrice Evra put it “a guarantee of a title” would be a big carrot for Nasri to follow considering that during his three seasons at Arsenal he has won nothing.

However, is a deal really very feasible? Arsenal and United hold a strong, often fierce rivalry stemming from over 20 years ago, and continued through the 2000’s (more in my time) when the Roy Keane – Patrick Viera feuds were as intense and passionate as they were entertaining. Would already disgruntled Arsenal fans be happy at letting their player of the season go to those fierce rivals United? Of course not.

The French publication L’quipe state sensibly that contract negotiations will resume in mid June, as Nasri is currently reflecting and relaxing on holiday in Dubai. You have to think that these negotiations will go somewhere positive from Arsenal’s point of view. Another source states that Samir Nasri’s agent leaked to the media news of Manchester United’s interest so that Arsenal would panic and offer Nasri a better contract. In today’s world though, improved pay in contracts at big clubs are regular occurrences.

Wenger knows the danger of not signing a player up on a longer contract, and has made clear of his intention to avoid the situation that ensued when Mathieu Flamini did not sign a new contract in 2008. He will however, not be held to ransom over the new contract; he will not pay Nasri or Clichy, the other contract “rebel” over the odds for their weekly wages. Wenger has a wage structure which he is comfortable with and would not be changing it any time soon.

There are a few possibilities about what is really going on: Samir Nasri is waiting for a new improved contract extension to stay at Arsenal, or is waiting for a trophy winning club to come in and offer him a way out of Arsenal and that club may be Manchester Untied.

Evra has blatantly urged his compatriot to Manchester United, saying how he would become a “king” rather than just a “prince” at United, however, whichever way you look at it, a deal with Manchester United does not seem likely. I suspect a new deal will be offered by Arsenal to Nasri in June and that he will accept. Bear in mind though that if the Manchester United manager makes Nasri a prime target, a deal would be possible.

It is a rumour tangled in various routes and sub rumours, but if Wenger cannot sort this out in time, Arsenal fans will be furious, and Arsenal’s side will be much weaker without him.