The Kids on the Block: Man Utd’s Chris Smalling 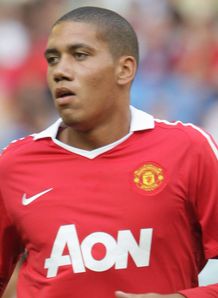 Hi and welcome to the 3rd installment of The Kids on the Block, because of the Champions League final I have decided to write about Chris Smalling. I hope you enjoy it…

Not many footballers experience as much of an epic rise into Premier League football as Chris Smalling. 4 years ago he was trying to break into Maidstone United’s first team and now he finds himself on the fringes of Manchester United’s first XI. Smalling is a tall, strong and confident centre back that has the ability to make powerful tackles. His style of play is very similar to Rio Ferdinand, a player he us trying to dethrone from the Manchester United defence.

Smalling hasn’t been in the spotlight for a long time, but coaches within the English national set-up had already witnessed his impressive talent and awarded him 5 England Schoolboy caps whilst still with Maidstone. His international appearances alerted many top clubs and Middlesbrough managed to secure his signature on a two year contract in May 2008, but the contract was cancelled soon after it was signed because Smalling expressed concerns about homesickness. Luckily, this did not mark the end of the road for Smalling as he was snapped up by Fulham a month later.

At Fulham he continued to progress and was made captain of the club’s development squad and was earmarked as a potential star by the club’s coaches. Fast forward one year and you see Chris Smalling complete his 4 year rise from non-league defender to premier league footballer in Fulham’s final game of the 2008-09 season on 24th May 2009 against Everton. During his 2 year stint with Fulham, Smalling racked up a total of 19 appearances for the club before a surprising move to Manchester United for an undisclosed fee.

At Manchester United he has continued to go from strength to strength, already making 34 appearances for the team in his debut season and an England cap definitely looks like it’s coming his way. He has been called up to the England squad before, against France last November; but he was unused substitute. As he gains more experience his confidence will increase more and more and it wont be long before he’s wearing the three lions shirt. Please leave comments below…