Chelsea Fans, You Must Wait For A New Signing! 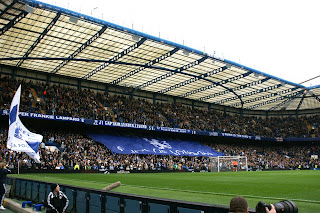 Carlo Ancelotti is gone. Now again, the managerial post at Chelsea is vacant for 6th time in 8 years of the Abramovich era. Whether it will be a totally new face up there, or a familiar one, we dont know yet.

Wide speculations are there in the media, that Hiddink will come back to Chelsea again, or it will be Frank Lampard’s uncle, Harry Redkanpp, who will be taking the onus at Stamford Bridge, or Roman Abramovich will try to lure some heavyweights, which are highly improbable  such as Pep Guardiola or Andres Villas Boas to Chelsea. But again, its just speculation from the media, and they are just feeding people with these stories.

But, there are some indications that players will not arrive until a new manager arrives at Chelsea. Maybe, Frank Arnesen will be taking some Chelsea players with him to Hamburg SV, which may include some under-performers of the last season along with the likes of Jeffery Bruma, Gael Kauta, etc, but still I think it will not happen until a new manager arrives at Chelsea.

There are also rumours that the Neymar deal is a done deal with Chelsea, with Neymar personally agreeing terms with the club, and a further 23 million pounds can successfully complete his move to Stamford Bridge, but in the end, I will still keeping on admitting that these are still rumours.

Roman Abramovich is not as predictable as everyone thinks, but I think he will at last give some authorities to the manager, for the control of player recruits and sales. So he will keep all Chelsea fans waiting for a new player, as he is perhaps, keeping an eye on the managerial role at this moment.

So forget Neymar, Lukaku, Van der Wiel for the moment, as Roman is hunting wild for a new manger to help Chelsea reclaim their Premier League title, and to claim the Champions League!