Manchester United and Arsenal are said to be preparing for a summer move for Real Madrid’s 18 year-old striker, Alvaro Morata. The player is highly regarded as a big future prospect who can hold the ball up well, finish clinically in front of goal and … 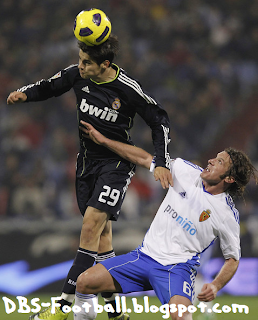 Manchester United and Arsenal are said to be preparing for a summer move for Real Madrid’s 18 year-old striker, Alvaro Morata. The player is highly regarded as a big future prospect who can hold the ball up well, finish clinically in front of goal and has excellent movement and heading ability, described as similar to former Madrid and Liverpool striker, Fernando Morientes.

Real Madrid’s current forward positions are tough places to win, with former United star Cristiano Ronaldo a nailed on regular, as well as competition from Karim Benzema, Gonzalo Higuain and Manchester City loanee, Emmanuel Adebayor. It is reportedly likely that due to a busy transfer market on the horizon for Madrid in the attacking department, including the prospective signing of Athletico Madrid’s Sergio Aguero, Jose Mourinho will have to let go some of the youngsters, despite their promise and potential.

The top teams in England are ready to pounce, with United, Arsenal and Chelsea all said to want Morata, who has been very impressive for Madrid’s reserves, recently scoring a hat-trick in a 7-1 win against Deportivo’s reserve side.

Manchester United apparently made a late bid for Morata at the end of the latest January transfer window, with TalkSport claiming that a “concrete” interest was shown by United only to be rejected by the Spanish club. There was no mention of what United may have bid for Morata, but the player has a contract which runs until June 2013 –  two more years, so he would not be out of Arsenal’s, Wenger’s or United’s price range.

When Real Madrid’s Higuain was injured during the season, the Spanish media asked Mourinho whether he would bring in Morata to the first team, to which the former Chelsea manager responded:

“He’s not prepared to be in the starting lineup of Real Madrid. He needs to grow up and finish his formation with the Castilla [Madrid’s reserves]”

Arsenal will be looking for a new striker in what Wenger has described as an unusually busy summer for him, especially as their Danish talent, Nicklas Bendtner has more or less confirmed he will be leaving the club in search of more game time. Arsenal seem happy to let him leave, as the profit made from him will be more useful than the player himself who has not lived up to his own high expectations.

Meanwhile, Manchester United’s attacking department is already very strong, with Michael Owen signing a new one year extension today as well as Dimitar Berbatov rejecting rumours of him leaving the club due to being left out of the Champions League final squad. United will also see the return of Danny Welbeck to their ranks, as all three mentioned strikers will fight for a starting place with Rooney and Hernandez.

However, the Spanish media have been somewhat sceptical over any possible transfer of Morata to England, especially on a permanent deal, citing the reason that Madrid are well aware of the huge potential he possesses. Despite the possible signing of Aguero, Madrid would do well to keep the Spanish Under-19 talent Morata at the Bernabeu and away from the clutches of top European clubs like United and Arsenal, whatever the cost.