This player has been linked with the Gunners for the past few months, he is making waves in the Brazilian League with his high scoring rate and impressive performances with his club Internacional. The player is now a Brazilian international and is bein… 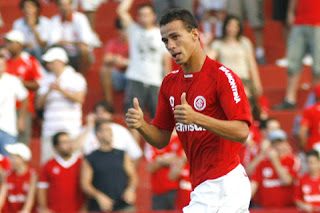 This player has been linked with the Gunners for the past few months, he is making waves in the Brazilian League with his high scoring rate and impressive performances with his club Internacional. The player is now a Brazilian international and is being linked with the best clubs in Europe, the player I’m talking about is Internacional sensation Leandro Damiao.

Leandro Damiao was born on July 22, 1989 in Jardem Alegre, Brazil. Leandro Damiao isn’t like any other Brazilian sensation that you know of, he’s not the Neymar, Robinho, Pato and many others who are hyped up by Youtube videos and such. Damiao took his chance the hard way, he was struggling to get a pro contract with his current club when he was 17. So Damiao, displaying his determination, decided to test his luck in the Brazilian lower divisions where he displayed his talent, especially in finishing and scoring goals. Internacional, finally gave him his chance and he has so far taken it brilliantly. Leandro Damiao is a truly gifted player who is known for his determination and his skill, especially inside the box. He stands at a bit over 6’1″ which assists him greatly aerially, he is a real presence inside the box with his predator instincts and clinical finishes, both with his head and feet. He is mobile, quick and skillful with the ball as well.

He is nicknamed “Damigol” by his fans at Internacional and has had a superb season so far with Internacional, scoring 22 goals in 24 matches, which brought the attention of Brazil national team coach Mano Menezes and was called up for the friendly against Scotland in the Emirates Stadium. Leandro Damiao is reportedly being targeted by the North London rivals, Arsenal and Tottenham and also by Spanish side Barcelona. Damiao is valued by transfermarkt.co.uk at around 5.7 million pounds and is being reported that both Arsenal and Tottenham, are willing to pay as much as 10 million pounds to sign this rising star. He has scored 29 goals in 53 appearances so far with Internacional.

In my opinion, I would prefer a proven player in Europe, but from what I’ve heard of and seen of him, he has a bright future and might prove to be a shrewd, good signing for the Gunners.

Most of you probably don’t know much about him, so here are some videos displaying his talents:

This is a video displaying a brilliant assist from Damiao with impressive skill:

What do you think? Should Wenger go for Damiao? Please share your thoughts and opinions.