It’s Chris Samba or Gary Cahill For Arsenal – Or Is It? 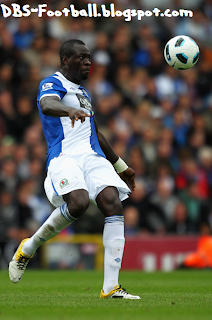 It is the general consensus at Arsenal that the team needs a strong, forceful centre back to add to the spine of the team and help them to some much needed trophies. It is also the general feeling among the gossip columns that Arsene Wenger will choose between either Blackburn’s Chris Samba, or Bolton’s Gary Cahill to fill that gap in his squad. But which one will it be? In truth, both seem increasingly unlikely for various reasons, so lets evaluate why.

Lets start with Chris Samba. At 27 years-old and a good 5 years with Blackburn, Samba has plenty of experience that the Arsenal team is often said to be lacking in. He stands at a towering 6 foot 4 inches, and is a force to be reckoned with defending set pieces, with his large frame able to reach above the attacking opponents to clear the danger. He would slot nicely into the defence alongside the combative Thomas Vermaelen, who was missed terribly last season for Arsenal.

Samba revealed last season that he was close to joining Arsenal in the January transfer market, which shows that Arsenal are clearly interested in the player, which is good news, as it shows Wenger’s intent to add experience and power to his defence. However, Arsenal’s £10 million bid was not enough to persuade Blackburn part with their captain, but it is thought that £12 million would be the price in which Blackburn would be willing to let Samba go.

Unfortunately for Arsenal, recent transfer events have transpired against them. In fact, it may be arch rivals Manchester United’s fault that Arsenal miss out on Samba – not because United are themselves interested in Samba, but because Sir Alex Ferguson has recently stolen Samba’s young defensive partner Phil Jones away from Ewood Park. Would Blackburn be willing to let both halves of their defensive backbone leave the club in one transfer window?

That doesn’t seem likely unless Arsenal tie up a deal for Samba quickly, as that way, Blackburn will have both the time in the market and the money from the sales of the pair to find some replacements and back-up. Last season Samba and Jones were vital players in the sides survival, and so losing them both would not help the club one bit – the club surely understand this, and however swiftly a deal for Samba could be done would still be very reluctant in letting him go.

Next, and to Gary Cahill. He, like Samba is a strong, fearless defender, and having played in the Premier League since 2004, has the experience needed at Arsenal. At 25 years-old, he has more of a long term future than Samba, and has more time for improvement, though some may argue potential is not what Arsenal need at the moment.

The gossip columns have been all over this story, with Cahill said to be wanted by Manchester City as well as Arsenal, and will cost at least £17 million to match the players release clause in his Bolton contract.

Should I stop there? Wenger probably would want to after hearing £17 million. That amount would be the immediate detractor for Arsenal, whilst being absolutely no obstacle for City. The Daily Mail have come up with a clever little solution of sorts for Wenger, as they claim that Arsenal may offer their young 19 year-old Spanish centre back Ignasi Miquel on loan to Bolton as well as cash to persuade them to part with Cahill.

Of course, a player plus cash deal seems attractive for Bolton, but with Miquel’s inexperience in the Premier League, it seems a big risk for them and a young experiment for Arsenal to see how their youth player does at the Reebok. Bolton are no stranger to Arsenal’s loans, with a very useful one in Jack Wilshere occurring just two season ago in which the 19 year-old came of age and subsequently broke into the Arsenal first team, but this one may be less attractive.

If it is money Bolton are looking for, then City would win a bidding war with Arsenal immediately. So, if Wenger does make one of these players his priority for the summer, then it looks more likely to be Chris Samba, due simply because he is the cheaper option and it would avoid a huge bidding war with big spender Manchester City. Contrary to some reports then, it will be either Samba or Cahill rather than Samba and Cahill who may join recent £1 million signing Carl Jenkinson at Arsenal.