Why Would Nemanja Vidic Want To Leave Manchester United? 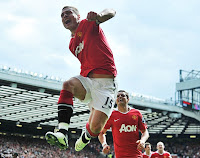 Nemanja Vidic’s agent, Silvano Martina, has dismissed that there is any truth to the rumors that he has thought about exiting Manchester United.

Instead, he said that Red Devils center-back has absolutely no intention to leaving Old Trafford, because he has everything that he could ever want right at his finger tips.

He already has earned the captain’s armband and countless pieces of both team and personal silverware – what could really tempt a player of Vidic’s stature to leave a prosperous club like Manchester United?

Of all clubs, Juventus are the ones that are said to be interested in landing his services, but right now Vidic is happy and staying put in England. It would be interesting to see if he left for Italy as his home country, Serbia, was given a 3-0 loss when their match was forced to be abandoned in October after rioting amongst the fans.

At the moment, Vidic is definitely the best central defender in the world, so it should be a compliment that other clubs want our best players. However, the only way that a team could land him would be over Sir Alex Ferguson’s limp body.

The Gaffer rewarded him with a very lucrative contract and made him the club’s long term skipper for a reason – and that is not to just turnaround and sell him. Before he signed the deal last summer, Vidic was thought to have wanted to leave Old Trafford and it was thought there was nothing that Sir Alex could have done to keep him.

Vidic showed just how valuable he is to Manchester United by leading the club to its 19th English title and picking up the Barclays Premier League’s Player of the Season along the way. The United No. 15 was the only reliable constant figurehead in the back-four by playing a club-best 47 games in 2010/11, which is why he will never be leaving the club.

There are a couple of problems that are with the comments, which raises though. 1) Why would his agent ever suggest a transfer?; 2) Did Vidic really say “right now” meaning that he could potentially leave Old Trafford?

“I talked to him about a hypothetical transfer and he replied, ‘I am the captain of Manchester United, earning well, I’ve won almost everything. Why should I go to Italy right now, when Italian football is going through a turbulent period?'”

This is needless transfer talk that is a completely desperate attempt to make Martina more money. What it could do is cloud and twist Vidic’s head to think about greener pastures. The last thing that Ferguson wants or needs right now – or ever, for that matter – is to have one of his leaders not to be focused on the tasks at hand – especially in a period of transition.

After this superfluous talk Silvano Martina insisted that Nemanja Vidic is staying at Manchester United will please everyone except rival teams and fans.