Arsenal Close In on £12m Striker With Willian to Follow 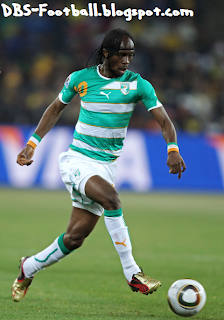 Gervinho played a key role in Lille’s trophy winning season, but he has been clear to his French club that this summer, he wants out, and prefers a move to the Premier League. Arsenal too have made their interest clear, and reports suggest that the player and Arsenal are involved, or are to be involved in discussions over a potential move.
The Lille general manager Frederic Paquet revealed:

“He wants to go and has developed contacts with Arsenal. We will soon have talks with them and see what they offer. He has expressed a desire to go to England and we will see what happens.”

Arsenal’s case for signing the 24 year-old Ivorian are strengthened by the fact that Lille are not willing to sell Gervinho to a fellow French side, reducing any other possible competitors and perhaps avoiding a bidding war between two sides. Arsene Wenger would surely have backed out if a bidding war were to ensue. Paquet said:

“Paris St Germain inquired about Gervinho but we are not thinking about strengthening a competitor.”

Liverpool were said to be interested in signing Gervinho, but that interest seems to have been dampened by Kenny Dalglish’s insistence to sign young, English players, with Connor Wickham of Ipswich as well as Charlie Adam and Stewart Downing all said to be wanted by the Reds. Again, that reduces any competitors for the Ivorian’s signature, and increases Arsenal’s chances of adding to their squad.

With only 12 months to run on his contract, Lille are looking to sell now that the player has confirmed his intent to leave, and are reported to be demanding a fee in the region of £12 million. Despite reported interest from Tottenham, Arsenal are looking the strong favourited to land Gervinho, who was recently praised by Arsenal defender Johan Djourou as having “all the ingredients to play for Arsenal, that is a definite.”

Meanwhile, TalkSport claim that Arsenal have “made an approach for Shakhtar Donetsk midfielder Willian”. I previously blogged about Arsenal’s interest in the 23 year-old Brazilian Willian, however, in the previous article I wrote, it seems the quoted transfer fee was a few million off.

Arsenal’s unwanted central midfielder and fellow Brazilian Denilson is almost certainly going to be part of any deal, but Arsenal will also have to pay a figure of £12 million, rather than the £4 million I originally stated last week. Shakhtar Donetsk paid £11 million for Willian just four yeas ago, and with just 12 months on his contact left, like Gervinho, you would think the asking price would be slightly less, however it perhaps emphasises the quality of the player.

TalkSport say that Arsenal have told the Ukranian club that they must receive a reply before this week-end for a deal to go through, and thanks to a good relationship between Shakhtar and Arsenal after the sale of Eduardo in 2010, Arsenal are the favourites to sign Willian.