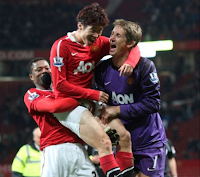 After a story broke last week about his future, Ji-Sung Park was questioned about it, which he quickly refuted those rumors and confirmed that he wants to stay at Manchester United.

The always respectful South Korean was on hand to kick off the club’s Asia Trophy Tour in Hong Kong, and he knows that he still serves a purpose – other than just selling shirts.

It should be music the United supporter’s ears that Park wants to stay, because he has scored countless important goals so far throughout his six-year career at Old Trafford.

With the recent arrival of Ashley Young, Park seems to be the odd-man out, because both players are very similar in the aspect that they can play out wide or through the center.

However, Park quickly let everyone know that he is committed to the United cause.

Whenever there is a big game, Sir Alex Ferguson, who has tremendous faith in him, is rarely let down by his energetic, multifaceted midfielder – which confounds his critics sentiments.

Yes, some of those pundits heap praise on him for his boundless amounts of energy, but they fail to realize how cool he is under pressure. His last goal of the 2010/11 season showed how exactly how composed he is by clipping the ball up and over the goalkeeper under pressure from defenders.

To everyone’s amazement, Park runs at the same exact all-out pace he does in the first as he does in the 90th minute, which is really not an easy thing to do.

Ji-Sung Park is one of the hardest workers in football and, despite popular belief, it is always a privilege to see him play for Manchester United.