Manuel Almunia: Only reason he’s still in the squad is because nobody wants to buy him! The fans are still wondering why he’s there, can make a team lose a game single-handedly. Ok shot-stopper, terrible anticipation, horrendous communication skills, bound to leave and if he doesn’t he won’t play a game unless the three other keepers are all injured.

Vito Mannone: The only unbeaten goalkeeper in the squad! Weird, Right? Well, that’s because he only made nine appearances since he came to the club in 2005, set to play this season in Carling Cup games and be the third choice keeper. Inexperienced, has a bright future but not at Arsenal.

Lukasz Fabianski: More injury-Prone than Owen Hargreaves, No.1 goalkeeper last term before he got injured and replaced by Szczesny, Kind of experienced with 56 appearances for arsenal and a couple for Poland.

Wojciech Szczesny: At the beginning of last season, Szczesny claimed that he wants to be Arsenal’s no.1 goalkeeper, not even able to pronounce his name, fans laughed at his statement, but anything is possible at the Emirates (apparently), by the end of the season with help from slippery hands Almunia and always on the treatment table Fabianski, Szczesny was no.1 goalkeeper, helping his claim with stellar performances. With great reflexes and jumping ability, the 21-year Polish is set to guard the posts this season.

Thomas Vermaelen: Recently appointed vice –captain, the only solid centre half, had an amazing first season followed by a disappointing season where he was injured for the 99% of it. Can slot in at left back, will have to carry Arsenal’s defence on his shoulder this season.

Bacary Sagna: The best right back in the Premier League, one of Wenger’s findings , only a matter of time before the ”I want to win trophies” banner comes out. Ever-consistent.

Laurent Koscieleny: Signed from Lorient last season,making 43 appearances, the French-Polish man didn’t except to play this many games on his first season, but Arsenal’s defence would accommodate anyone at the moment, even a return of Pascal Cygan. Has the pace of a centre forward with the anticipation of Roy Carroll.

Sebastein Squillaci: Was one of wenger’s bargain buys, had a good start to the season, then turned out to be worse than Silvestre, slow as a turtle and fans will always remember his terrible performances against West Brom last season.

Johan Djourou: The tallest player in arsenal’s squad, that’s about it, specialized in scoring own goals and confusing goalkeepers. The Swiss international (somehow) scored one goal in 117 appearances, so it’s fair to say that Djourou likes to score in his own goal only.

Carl Jenkinson: Lanky 19-year old signed from Chartlon (League One side) this season, played only 9 times for Chartlon, looks to be Eboue’s replacement as a cover for Sagna, can also play in the centre of defence, had a good pre-season besides that wonderful own goal against Koln.

Kieran Gibbs: He makes Clichy look good, fans will never forget his slip against Man Utd. Wenger seems to be convinced that he’s finally ready for first-team football, but he faces the epic battle with his knee, the attacking fullback usually plays one game and misses five.

Armand Traore: Arsenal keep sending him on loan, but he doesn’t seem to learn anything, he makes Gibbs look good, has pace but cannot tackle to save his life, looks to add needed backup for Gibbs. 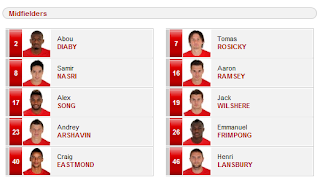 Tomas Rosicky: has fallen in love with the treatment table, forgot how to shoot since arriving in London, passes the ball sideways more than Denilson, no where near the player he used to be or was supposed to be.

Abou Diaby: Most irritating player on the ball, was supposed to be the next Vieira, but will never live up to that tag. Good with the ball in his feet, and the verdict still out if he’s an attacking or a defensive midfielder.

Samir Nasri: It’s obvious that Nasri used Arsenal as a stepping stone, set to join Man City; he will have a villain status at the Emirates. He’ll be more hated than Adebayor.

Alex Song: The defensive midfielder was one of the most consistent players last season, strong, neat with possession but lacks pace. The Cameroonian get lots of yellow cards but that’s his job really.

Aaron Ramsey: Wales Captain! Showcross is responsible for delaying his rise to stardom, with a good pre-season under his belt, he’s destined to feature regularly this season.

Jack Wilshere: Voted Best Arsenal Player and PFA Young Player of the year last season, the young England man is burdened with the midfield responsibility early on, a star already, can fit in Barcelona midfield comfortably. Wilshere is a player known for his movement, aggression, dribbling, vision, passing and combination play.

Emmanuel Frimpong: “He’ quick, he’s strong, his *ick is rather long, Frimpong, Frimpong” the chant set to echo through the Emirates this season, The defensive midfielder is Song’s back-up, like the other players his injury prevented him from featuring in more games last season. Has a good understanding with Wilshere.

Henri Lansbury: His best accomplishment so far is dating a model! Helped Norwich to promotion, if he’s not loaned out this season, the U-21 England midfielder would make rare appearances.

Andrey Arshavin: The lazy Russian had a great six months, but seem to have forgotten how to play football ever since, forever not fit to finish a game, doesn’t cover or pressure his shadow, should’ve left and signed for Anzhi  and make some money before retiring.

Craig Eastmond: Another young English player, third choice defensive midfielder, set to play in Carling Cup, not even close to being good enough for Premier League.

Van Persie: Might be the only big name left at arsenal, seem to have solved his injury problems, great technique and a left foot. He needs back-up, carried the team on his own towards the end of last season, the Dutchman has been recently appointed captain upon Fabregas’s departure.

Theo Walcott: Has the pace of a sprinter with the footballing mind of a chicken, 4 years and Walcott is still running balls out of play,  has terrible control even worse at crossing, overrated, when marked seems to not exist, but has improved his finishing.

Alex Oxlade-Chamberlain: Most expensive player to be signed from the Championship at £12 Million looks as if he’s the same as Walcott but Walcott 4 years ago, better at shooting.

Gervinho: Gervinho completed a transfer from Lille to Arsenal for a fee believed to be around £10.5 million, the Ivorian scored 28 goals and has 14 assists in two seasons for Lille and looks to be a good signing. He can play centre forward but prefers the right flank, has pace, loves dribbling, needs to work on his final ball.

Marouane Chamakh: Brought to Arsenal on a free transfer to provide aerial threat, only managed to score 7 Premier League goals and most of them are not headers. Usually fades out of games, terrible control and awful passing skills.

Ryo Miyachi: Rumoured to be faster than Walcott, so with that said he’s got to have a better final ball, the young Japanese forward is a real prospect and impressed during pre-season, Arsene secured a work permit for him after he spent 6 months on loan at Feynoord last season.

Nicklas Bendnter: Some fans love him some fans hate him, the powerful forward struck a couple of crucial last-gasp goals to keep his side in the title race in 2010. Gone as soon as a club meet his value which is set to be around £8 Million.

Joell Campbell: Another teenager brought by Wenger, the Costa-Rican is rated highly after the Copa America, has an eye for goal, energetic and a strong left foot.