Chelsea vs Everton – Finally the 2 week international break has come to an end and the Premier league action is back! These two weeks have felt like a month, it seriously sucks with no EPL action and I am eagerly waiting for this tie to start.

Chelsea arrive into this game with a comprehensive 5-1 win against Bolton at the Reebok where Chelsea probably played the best first half of this season so far. Game also marked the return-to-form of Super Frankie who scored a wonderful hat-trick and Danny Sturridge as well who continued his good performance in the blue jersey with yet another brace against his former loan team.

Everton on the other hand went down in their fierce derby against Liverpool losing 2-0 at home. Everton (along with Spurs) currently lie 13th in the table having played a game less than any other teams. David Moyes can be proud of his team who hung on to the game till the 70th minute after losing Rodwell to a dubious red card in 23rd minute, a red card which was later overturned by FA. But goals from Carroll and Suarez lend Moyes yet another defeat in their Merseyside derby.

Chelsea will be without Fernando Torres who is suspended, serving his second match under suspension after sitting out in the 5-1 win over Bolton. Hilario and Michael Essien remain out injured. there are no other injury concerns following the international ties. Didier Drogba should start in place of suspended Fernando Torres upfront.

Few players played two games like David Luiz while rest had just one game, so it all depends on how AVB looks at these situations and as it has been his policy in the recent matches. He will definitely start with a sqaud which is fresh and not tired because of too much football.

Everton welcome back Jack Rodwell who’s red card suspension was overturned by FA. David Moyes has no major injury concerns but always had to work with a depleted squad. And this game could see the same starting X1 against Chelsea.

Do let us know what will be your starting line up for the game against Everton this Saturday. Who will start for you?

My starting line up for Chelsea vs Everton would be 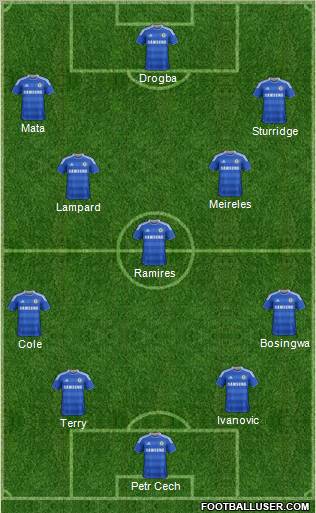 Everton have not won a Premier League match at Stamford Bridge in 17 years.

Our 10 previous meetings at Stamford Bridge

Chelsea v Everton in all competitions

Head-to-head in the League at Stamford Bridge

John Terry will make his 350th Premier League appearance for the Blues and Ramires will make his 50th Chelsea appearance. Chelsea need four more league goals to reach 6,000 in our 106 year history.

Everton have only one away win out of their last five meetings with three defeats. Suffering defeat against Liverpool two weeks ago was the first occasion for 68 games that Everton lost consecutive league matches.

Everton have kept two clean sheets in their last 13 games in all competitions. David Moyes is the fourth longest serving manager in the Premier and Football League behind Sir Alex Ferguson, Arsène Wenger and John Coleman of Accrington Stanley.

Do let us know what will be your starting line up for the game against Everton this Saturday. Who will start for you? Lampard, Drogba, Luiz, Anelka….. Express your views and opinions on our Facebook Fan page

Put on your thinking hats and predict the scoreline for this match… Just LIKE our Facebook Fan page and predict your scores…who will score first for Chelsea.. and express your thoughts and opinions on the match…
So get ready for some pulsating action at the Stamford Bridge. Come on CHELSEA!!! KTBFFH.
Follow me and my blog on Twitter – http://goo.gl/BAIzZ
Follow the blog on Facebook – http://goo.gl/XHt5d
Grab my RSS Feed – http://goo.gl/WSEcV
Related TopicsChelseaEvertonMatch Preview