Sunday’s game marks yet another West London Derby between Chelsea and Queens Park Rangers. Previous to this season Chelsea and Fulham played out the West London Derby games but with the promotion of QPR to the premier league this season has introduced yet another enticing derby rivalry of all time. It will be our first league meeting with Queen’s Park Rangers for 15 years.

And Chelsea go into this second West London derby (first being against Fulham) on a very positive note having struck 13 goals in the last three games in all competitions. Chelsea’s 5-0 win over Genk was our biggest win in the UEFA Champions league history at Stamford Bridge. It was a brilliant performance by a side put out by AVB which had some major team changes keeping the game at Loftus Road in mind.

AVB made it clear by his selection policy that how much importance he gave to the Derby game against QPR resting Terry, Sturridge and many other first team squad. The win over Genk showed the class of the squad but in particular it was Raul Meireles and Fernando Torres along with the debutant Oriol Romeu who had a fantastic game.

It was good to see Torres in the same form as he was with Liverpool and both the goals scored by him were world class. I am really happy for this bloke as he has been very professional is his bad days at Chelsea and took a hell lot of criticism which according to me were all unwarranted. Its a pity though that we wont get to see another masterclass from Torres against QPR as he has to sit out for the last game for his red card incident.

QPR have made a decent start on their return to England’s top flight having amassed nine points from their opening eight fixtures. QPR side managed by Neil Warnock currently lie on 11th position in the EPL table, a position which Neil Warnock is pleased with. QPR were held to a 1-1 draw by Blackburn in their last Premier League game, it was a game which Neil Warnock’s side should have won given the awful form of Rovers but a point is not that bad for the newly promoted side.

Derby games are never easy especially the ones away from home but if Chelsea go in with the form they are in then another goal feast could be in the offering. Even though I am not a fan of past stats but Chelsea have had a good share of success against our Derby rivals. QPR do not have history on their side having won just one of their last 14 matches in all competitions against us.

Ramires will miss out on the west London derby following the knee injury he suffered last weekend against Everton. Fernando Torres will sit out for the last of his three games for the red card suspension.

AVB has been spot on so far with this team rotation giving enough time for all players to have match time under their belt. 5-0 win against Genk saw AVB bring in six changes to the team that defeated Everton 3-1 last weekend and would be looking to do the same for the game against QPR with the likes of Sturridge, Terry, Mikel, Mata and Drogba being brought into the starting line-up. Hilario and Essien remain our long term absentees.

Warnock will be without striker DJ Campbell for the visit of the Blues as he is sidelined with a cracked metatarsal. Heidar Helguson who scored in the 1-1 draw against Rovers should retain his place.

Adel Taarabt is pushing for a recall having emerged from the bench against Blackburn Rovers. Defender Daniel Gabbidon (knee), striker Rob Hulse (knee) and midfielder Kieron Dyer (foot) are all unavailable for QPR. What could be the starting line-up for the QPR vs Chelsea tie at Loftus Road??

My starting line up would be 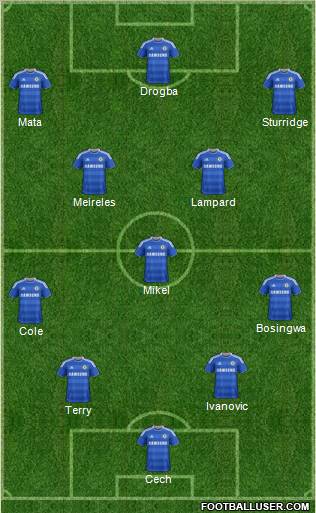 Last weekend’s strike by Heidar Helguson is the only home goal scored by one of QPR’s own players over 376 minutes this season.

QPR v Chelsea in all competitions

Head to head in the league at Loftus Road

Chelsea are unbeaten in our last 63 games against newly promoted teams in a run stretching back to April 2001 when Charlton defeated us at Stamford Bridge. The 63 games include 54 wins and nine draws. Chelsea have kept only one clean sheet in our last 12 EPL games which came in the opening game against Stoke.

QPR have not won at Loftus Road for seven games. QPR have not lost when they have opened the scoring and haven’t won when their opposition scored first. Rangers have claimed just three of their nine points at Loftus Road this term.