Ex-Arsenal striker Thierry Henry is training with the club and Marouane Chamakh should be picking up tips from the Gunners legend. 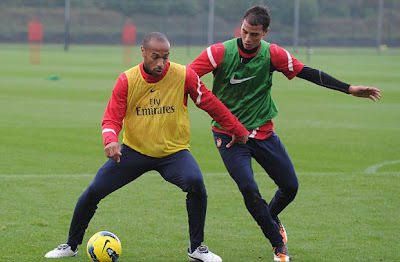 226 goals and 92 assists in 369 games are the outstanding statistics that Arsenal legend Thierry Henry can proudly claim to have achieved in his eight years under Wenger, as he rejoined his old clubs training routine in London to keep fit for his current MLS side, New York Red Bulls.

They are figures that current Arsenal striker Marouane Chamakh, who has found getting games and goals at the Emirates hard to come by recently, may only dream of, mainly thanks to the brilliant form of his Dutch colleague and Henry-influenced attacker, Robin van Persie, who has been stealing the limelight in a wonderful start to his season.

Chamakh should use his time training with Henry to get as much advice as possible, judging by the picture above, lesson number 1 is ‘how to shield the ball’.

Arsene Wenger was delighted to have the now 34 year-old French striker back amongst his squad, saying:

“Thierry was back training with us. He just wants to stay fit, enjoy himself and come back to Arsenal Football Club. He is at home here so it’s always good to have him back.”

“We kept in touch anyway, even in the States. He just turns up and practices. When it’s possible of course he can practice with the first team.”

“He always gives us a lift and shows just what a good player he is. He doesn’t like to lose – that doesn’t change.”

However, Wenger has ruled out any sort of short term loan move the Henry, which will come as a relief to Chamakh. The last thing he needs is another player ahead of him in the pecking order.