The Madness of Raymond Domenech “It is almost a beautiful 0-0. But the result is what it is. They were good, solid in defence.”

These simple words, used by France nation team coach; Raymond Domenech, after his side limped to a 0-0 draw against ten man Uruguay in their World Cup Group A match on Friday. A game which in fact Les Bleus seemingly dominated, leading the way on attempts on goal; ten compared to Uruguay’s three, possession; 57% compared to Uruguay’s 43%, and in other areas such as corners and free kicks.

Although France dominated the stats on the night, it was made abundantly clear that France lack the required potential, or firepower to beat teams, let alone cause Uruguay any real concern. This subsequently highlighted the belief that the French team are still stuck in the past, lacklustre and the fact that a team with the array of talents can ultimately fail to overpower a ten man team with only two real quality players, would consequently highlight my belief that the France team have somewhat of a clueless and outdated manager in charge. 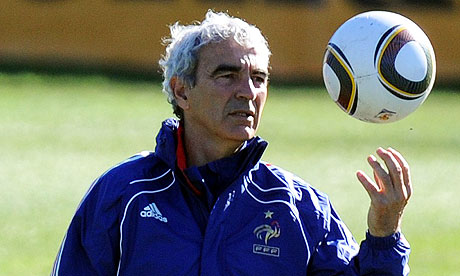 Before the start of the World Cup, Domenech made some very strange decisions when selecting his 23 man squad for the trip to South Africa. Most noticeably leaving out Arsenal’s Samir Nasri; who arguably had his best season at the Emirates this year and was one of the Gunners best players this year. Also the rejuvenated Senegalese-born, 33 year old, French legend Patrick Vieira; who left the comfort of the Inter Milan substitutes bench, to return to the Premier League and play for Manchester City, was also left out of the squad. Finally and most noticeably is the somewhat harsh treatment of striker Karim Benzema. The 22 year old joined Real Madrid for €35 million from French side Olympique Lyonnaise, but he struggled to make a consistent impact in Madrid, mainly due to the outstanding form of Gonzalo Higuian and Cristiano Ronaldo, as well as niggling injuries, leaving him to score just 8 goals in 27 appearances. This was deemed insufficient enough for a place on the plane, with Lyon’s Sidney Govou and Djibril Cisse of Panathinaikos in his place. In the past, the 58 year old has been no stranger to odd selection decisions. It was believed that he left out Robert Pires, who in his prime at Arsenal was left out of the EURO 2004 squad as rumours surfaced that it was believed Domenech’s apparent Astrological beliefs and subsequent “distrust of Scorpio’s” led to his omission from the squad. Domenech then fell out with the man picked ahead of Pires in the squad (Vikash Dhorosoo) leading to the then Lyon player to retire from international football. Similar cases of strange exclusions include leaving both Nicholas Anelka and Champions League winning Barcelona star Ludovic Guily out of the 2006 squad, along with the established AS Roma centre back Philippe Mexes. In 2008, he left out one of the best French strikers in Europe, the in-form Djibril Cisse for the untested at international level Bafetmbi Gomis for the EURO 2008 squad. Even before the teams first game at this year’s World Cup, Domenech’s troubles began with the French sports minister; Rama Yade highlighted his distaste for the national side’s selection of a 5-star hotel, stating how Domenech would be held accountable for the teams poor performance, if they got to comfortable in their surroundings. Again the causes for concern was highlighted with the French team were seen taking part in a selection of “team building exercises” including buggy riding and cycling, which were recorded by the press and freely used on sports channels. The lack of discipline within the team is evidently when seeing these activities, while adding unnecessary risk to players, no more so then Arsenal’s William Gallas, who is deemed a vital player to the side, arising unscathed from an accident involving his buggy which had toppled over.

Again another problem, arising from the subsequent lack of discipline ever more plain to see amongst this year’s squad, is a story which is believed to be that there is now “disruption” and “revolt” within the camp, as Chelsea star Florent Malouda fell out with the coach before the game over a disagreement at Malouda’s overzealous training, as well as Domenech’s decision to play two holding midfielders (Diaby and Toulalon) rather than the Chelsea man. Then giving Domenech more team issues, aside of a 1-0 defeat to relative football minnows China, a talk of a “revolt” had been highlighted in many of the morning newspapers, and surrounding press, arising from the decision to instil Manchester United left back Patrice Evra as national team captain, rather than the popular 32 year old Barcelona striker Thierry Henry. These examples highlight the poor pre-tournament preparation from Domenech and his staff for France’s conquest onto the World’s biggest football competition. This lack of preparation and consequent disruption has been carried onto the pitch, and was palpably clear in the mediocre performance against Uruguay, the Frenchman now more than ever needs to get a grip of his squad, and the big characters involved it.

The French side before the game, on paper looks good enough to compete with any of the top teams in the World. The side started with Hugo Lloris in goal, Bacary Sagna, Eric Abidal, William Gallas and Captain Patrice Evra in defence. Arsenal midfielder Abou Diaby and Lyon midfielder Jeremy Toulalan in the holding midfield, Franck Ribery on the left with the talented Gourcuff on the right with Sidney Govou and Anelka upfront. A solid, experience and technically gifted team, that should be able to pass or play their way through any team in the World Cup, and with all respect a team such as Uruguay, off the pitch. However it was evidently clear within 15 minutes of the match, they were no real nerves from the French nor were there any real concern for the opponents they were facing, but there was a distinct lack of enthusiasm and excitement from the French side to even collect all three points.

During the game, with Uruguayan substitute Nicolas Lodeiro sent off after less than 10 minutes on the pitch, Domenech decided to leave 30 year old forward Sidney Govou on the pitch, as he took off Chelsea’s in-form Nicholas Anelka off for the out of favour Thierry Henry. A decision which baffled many, as Govou’s poor performance was evident for all to see. Subsequent baffling decisions included bring on 6ft 2in centre forward Andre-Pierre Gignac, and playing on the right wing position of the front three while the likes of Florent Malouda was placed as a supporting striker, situated behind Thierry Henry, and Franck Ribery on the left. Is it just me or does this make absolutely no sense. Surely a big powerful centre forward would be better situated upfront next to Henry, with Malouda on the left and Ribery on the right? But for some reason, Domenech’s players looked confused and unsure of where they were playing or even what the tactics were, it seems Domenech’s confused managerial choices had spilt onto the pitch, and confused the players.

Is it unfair to base the France team’s chances on this performance? Or is it just the nerves of playing on the first day of this major tournament hindering their performance? With the experienced and talented individuals on show, it would be unlikely to believe nerves would get the better of a team like this. Let’s not forget France stuttered their way into the finals finishing second in the qualifiers, and beating the Republic of Ireland in the playoffs thanks to the “hand of Henry”. It would seem that France have been out of form for since EURO 2008, all under the guidance of Domenech.

Is this talk of revolt and dispute over the captaincy means that the big names in the dressing room are causing a divide having subsequently losing faith in the manager; it looks more and more like it doesn’t really bother Domenech! And that fact that former Girondins de Bordeaux manager; Laurent Blanc has already agreed to take over. Therefore there is no real pressure on Domenech to get the French national team to perform nor would it seem there is any motivation for success, something which now visibly displayed on the pitch. Is the enthusiasm and excitement shown on the touchlines by other managers such as Joachim Low of Germany and Diego Maradona of Argentina that which is needed? Definitely, but the sooner the 58 year old leaves, the quicker the France national team can get the fresh start it needs, the sooner the French fans can dream of success in the near future.