The low-down on Manchester United youngster Robbie Brady who is currently on loan with Hull City. Will Brady go on to be a United star? We look at his future 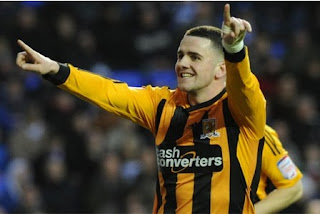 Manchester United youngster Robbie Brady, the newly crowned Ireland U-21 Player of the Year award winner, is spending his time this season on loan at Hull City applying his craft to become a better all round player. He hasn’t had the greatest statistical season scoring twice in 27 appearances for Hull City this season. When it comes to putting on the Irish green, Robbie has scored 4 goals for Irelands U-21’s.

Robbie hasn’t sparkles yet but he has scored twice against Reading who are currently third in the Championship and are in line for qualifying for a playoff spot. Hull, who are currently in ninth place with 51 points with a game in hand ahead of both 5th and 6th placed Birmingham and Cardiff City, can catapult themselves into a playoff position with a win this weekend. There are three months left and in football, that is a long time.

As I go over the future plans of Robbie Brady, we will break down some of the possibilities. Robbie could follow in the foot steps of David Beckham and Tom Cleverley, who spent time in the Championship gaining valuable first team football. And like Cleverley, he could ply his craft in the Premier League next season. There is no guarantee he will be fighting for a spot at Old Trafford next season, but just like Danny Welbeck and Tom Cleverley did last season for Sunderland and Wigan respectively, spending a whole year at those clubs have evolved them into top players.

Currently, Danny Welbeck is Wayne Rooney’s strike partner with both Chicharito and Dimitar Berbatov on the bench. Tom Cleverley had a sizzling start to his United career that included great displays against City, Arsenal, Spurs, and West Brom before he suffered ankle ligament damage at Bolton.

If Hull City get promoted, it is a logical decision to stay with them. If that doesn’t work out, maybe Sir Alex would extend a hand out to Bolton who are known for helping develop top players like Daniel Sturridge and Jack Wilshere, and who are now making huge impacts at their current parent clubs.

Due to competition being so tight at Old Trafford especially in the wide positions with Nani, Antonino Valencia, and Ashley Young all vying for spots, a loan move looks more likely for the Irish youngster next season.

Robbie Brady has improved his all round game this term, he isn’t scoring as many goals as Hull City fans would of liked, but his contribution off the ball has been excellent. I have spoken to several Hull City fans and learned that several weeks ago, he was dropped from the starting 11, but regained his spot back after showing that not only can he be sublime and creative, but that he also helps out in defence. He puts in 110% every game he plays.

There are three months left in the Championship, will Robbie help Hull City secure a playoff spot? Can Robbie become a star at United?