A lot of Chelsea fans appear to be very happy that they were drawn against Benfica in the Champions League, here’s why you really shouldn’t be too confident.

A lot of Chelsea fans appear to be very happy that they were drawn against S.L. Benfica in the Champions League quarter finals, but really you shouldn’t be too confident.

You can’t underestimate Benfica, they play very much like an English team; open, offensive but solid the back. Often when they pass the ball around they can become exposed and out of shape, playing 3 defenders and 6 midfielders with Javi Garcia being the defensive midfielder and Maximiliano Pereira playing as a wide midfielder as well. Despite being a defender he acts more like a winger who will defend and attack making it more a 3 man defence.

Chelsea will have to expose the weakness of the centre back Garay, who is a decent player but not top-drawer. Garay  will probably be covered by Luisao who is very good at his job though. Benfica can switch from playing box to box and going all out to sitting back and being more tactical in their approach. Cardozo is likely to be the lone man up front with one of the midfielders, Aimar or Gaitan, two brilliant players supporting, him so he doesn’t become isolated.

In their last game against SC Beira-Mar Benfica had 62% possession and 12 shots on goal and completely dominated with Cardozo scoring twice and Gaitan scoring one in a 3-1 win, conceding a goal when the back 3 were exposed. Also, the link up play between the midfielders and strikers will have to be stopped because Benfica are very fluid and could catch Chelsea’s ageing midfielders out, to stop this they must cut the supply line to Cardozo, who can hold the ball up and lay it off to midfielders like Gaitan and Aimar who could punish Chelsea.

The Blues have to break up the line between Benfica’s midfield and attack. This is key, so playing a defence minded player like Essien or Mikel is so important, not just to break up their attacks and preventing counter attacks but to protect the back four and make the team more solid, and they must stay in position!

If Benfica do not play 3-1-5-1 it will probably be 3-1-4-2 taking one of the midfielders out and replacing them with either Javier Saviola or Nelson Oliveira who are also exceptional players. The Portuguese side are second in the Primeira Liga, one point behind leaders Porto and drew twice with Premier League champions Manchester United this season in the group stage of the Champions League, so it just shows that they are not a side to be underrated. 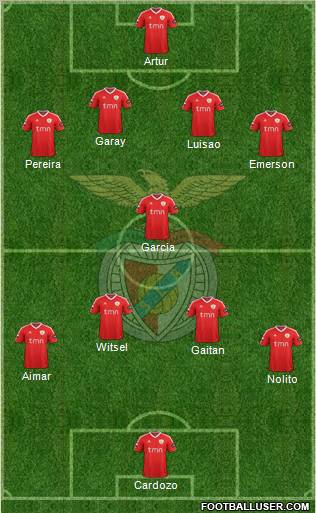