Chelsea kick-off their Club World Cup as they take on CONCACAF Champions League holders Monterrey in Yokohama at 10.30am on Thursday morning. Here’s a preview

Chelsea kick-off their FIFA Club World Cup as they take on CONCACAF Champions League holders Monterrey in Yokohama at 10.30am GMT on Thursday morning.

Interim boss Rafa Benitez will be hoping for a morale-boosting performance after a difficult start to life at Stamford Bridge. The pressure has been on the Spaniard after failing to record a win in his first three games in charge but he silenced disgruntled supporters with an impressive 3-1 win over Sunderland on Saturday.

A major boost for the Blues has been the return to form of striker Fernando Torres, who’s now scored four in his last two games and he will no doubt be hoping to continue that form on Thursday.

Chelsea will continue to be without the services of captain John Terry and forward Daniel Sturridge after the pair were left back in London to continue their recovery from injury.

Midfielder Oriol Romeu is also missing after being ruled out for six months with a serious knee injury. However, Frank Lampard is set to start after recovering from a calf problem thats kept him out for over two months. Lampard is expected to start alongside Mikel, who’s available as his three-match ban doesn’t apply in this competition, so Ramires is expected to make way.

Victor Moses may continue in attack in place of Oscar after his impressive form of late. 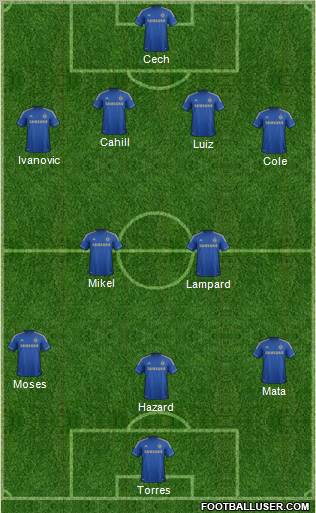 Premier League giants and UEFA Champions League winners Chelsea will be firm favourites for this game. While Monterrey will no doubt be up for the fight against their more glamorous counter-parts, we can’t see past a Blues win. Chelsea 2-0 Monterrey.

What would your line-up be and whats your score prediction? Get involved in the comments section below.