Arsenal are on the South Coast this weekend to take on Championship side Brighton for a place in the fifth round of the FA Cup. Here is a preview for the game.

Arsenal are on the South Coast this weekend to take on Brighton for a place in the fifth round of the FA Cup.

It took us two bites of the cherry to see off Swansea in the third round with Jack Wilshere scoring a late winner last week to secure a 1-0 win after we were held to a 2-2 draw at the Liberty Stadium first time around.

The last thing Arsene Wenger will want is a replay again this weekend so we’ll need to try and overcome an impressive looking Brighton outfit at the first attempt. But Brighton were superb in their third round clash dispatching Newcastle 2-0 so we’ll have to be on top of our game to beat Gus Poyet’s men this weekend.

Thomas Vermaelen will miss the game after picking up an ankle knock against West Ham on Wednesday. Arsene Wenger confirmed the news at his press conference on Friday morning but the skipper should be back to face Liverpool next Wednesday.

Mikel Arteta and Francis Coquelin are both still out but Abou Diaby and Tomas Rosicky return to the squad.

I think the boss will make some changes for this game and give a few players a much-needed rest. Prime candidates are Santi Cazorla and Jack Wilshere. Both have played a lot of football lately and Arsene hinted a couple of weeks ago he’d need to pick his moment to rest Jack. With important Premier League games against Liverpool and Stoke coming up, as well as the small matter of a Champions League double header with Bayern just around the corner, I think Wenger will take this opportunity to rest him and a few other regulars.

Carl Jenkinson and Andre Santos could come in for Sagna and Gibbsy while Alex Oxlade-Chamberlain should also get a game. Olivier Giroud is likely to start up front as, well, we have no other strikers! Unless Arsene decides to play Theo through the middle of course but I can see him also being given a rest. 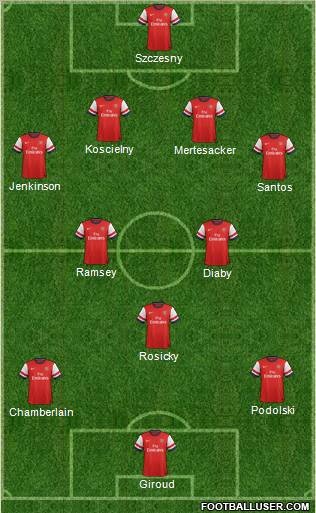 We haven’t played Brighton in a good number of years, 25 to be precise, so there is no recent record to go by. But the gulf in class should be evident on Saturday – even if we play a ‘weakened’ side – so long as we put in a professional performance. I can’t see past an Arsenal win. Brighton 1-3 Arsenal