Chelsea take on Steaua Bucharest in the first leg of their Europa League last 16 clash on Thursday evening. Here is a preview with team news for the big game.

Chelsea take on Steaua Bucharest in the first leg of their Europa League last 16 clash on Thursday evening.

The Blues secured Europe’s most prestigious prize last season and while they may have failed to put up a decent fight to defend their Champions League trophy this campaign, Rafa Benitez will be keen to give his squad a morale boosting run in the Europa League.

Chelsea needed a late Eden Hazard strike to secure a 2-1 aggregate win over Sparta Prague in the last round after a lackluster display at Stamford Bridge in the second leg, and they will need to put in a better performance tonight if they’re to take anything back to the Bridge this time around.

Steaua were in impressive form in the previous round, seeing off Dutch giants Ajax which included a 2-0 home win, so they have already proved they can beat the best in Europe on their day.

Rafa Benitez is expected to have one eye on Sunday’s FA Cup quarter final clash with Manchester United at Old Trafford so the likes of Ashley Cole, Branislav Ivanovic and Frank Lampard may get a rest tonight.

Fernando Torres will start up front with Demba Ba ineligible having played for Newcastle in a previous round. John Terry is expected to start with Gary Cahill favourite to partner him while Yossi Benayoun is also in contention after returning from an ankle problem.

Victor Moses and Ramires have not travelled with the squad and Oriol Romeu continues his rehabilitation from a serious knee injury. 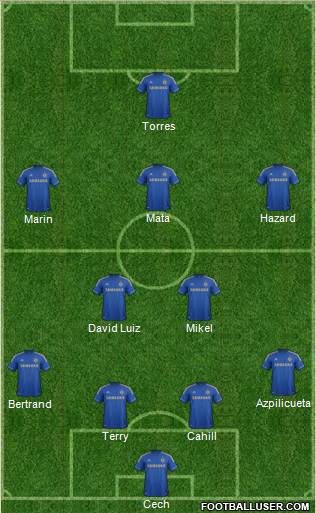 Steaua are flying in their domestic league – currently holding a 12 point advantage – but playing in Europe against one of the Premier League’s top sides is another level from what they’re used to playing week-in week-out. The Blues may have had an indifferent season so far but if they perform to their ability, they should have enough to edge this one tonight. Steaua 0-1 Chelsea