Arsenal take on Bayern Munich on Wednesday night. We look at the German outfit and give the latest team news, squad analysis and predict their line-up for the game

News broke on Monday that Franck Ribery will be out of Bayern Munich’s clash with Arsenal on Wednesday, joining team mates Bastian Schweinsteiger and Jerome Boateng on the growing list of absentees for the runaway German Bundesliga leaders.

Whilst the two German internationals are suspended, Ribery picked up an ankle injury in Saturday’s 3-2 victory over Fortuna Düsseldorf that has ruled him out of the second leg.

One of the favourites

However, Bayern Munich have one of the strongest squads in Europe. Although I think they’re a bit lightweight at the back, they have an endless number of talented midfielders to fill in the gaps.

Jerome Boateng was suspended for the first leg at the Emirates nearly three weeks ago, handing over the starting position to Daniel van Buyten at centre-back. Alongside Dante, the same back four that conceded just 1 goal to Arsenal on 19 February are all available for Bayern Munich, with David Alaba and Philipp Lahm completing the defence.

Javi Martinez was a record signing in Bundesliga history when Bayern Munich spent €40 million to bring him over from Spain. After slowly breaking into the first team, the former Athletic Club player has been a solid holding midfielder alongside Bastian Schweinsteiger.

Schweinsteiger’s suspension is likely to see Luiz Gustavo play alongside the Spaniard. The only time these two have started a single game together in all competitions this season was the 3-1 loss at BATE Borisov. One of just two defeats all season. However, neither are strangers to first-team football, starting a combined 36 games between them this season.

Ahead of them, there’s no reason why Toni Kroos won’t start as the central attacking midfielder behind the striker, and Thomas Müller on the right wing as per usual. Kroos scored the opening goal at the Emirates, created by Müller who himself scored the second.

Thomas Müller scored his 12th Bundesliga goal of the season at the weekend and is playing his best football of the season. A likely winner of Germany’s footballer of the season if he maintains his form.

Bayern Munich caused problems down Arsenal’s left in the first leg, with two of the three goals created down that side of the pitch.  Müller, a great counter threat.  Philipp Lahm a great attacking full-back.  Let’s expect to see this side to be Bayern’s strong point once more, with Arsenal struggling at left-back again.

Franck Ribery, a former winner of that award and a candidate for it this season leaves a space available on the left wing for a team mate. Arjen Robben would be the obvious choice except that he has had a calf problem of late. Should the former Chelsea forward not be fit to start, look towards Swiss youngster Xherdan Shaqiri.

Another solid acquisition by Bayern Munich over the summer, Shaqiri has featured in 26 games for the club this season, starting 10 of those. He has 1 goal in this competition this season, in the 4-1 thrashing of BATE Borisov. A skilful player who can deliver a good cross from the wing could cause Carl Jenkinson problems down the left.

Mario Mandzukic is likely to start up front again. The Croatian played 60 minutes at the weekend but has not scored in 3 appearances since the first leg of this tie. Remains the club’s league top scorer with 15 goals this season. Is keeping Mario Gomez out of the team.

Bayern to hit Arsenal on the break

Bayern Munich have scored 8 goals on the counter attack in the Bundesliga this season. Arsenal have looked poor defending counter attacks of late and as they’re going to need to score at least 3 goals on the night to have a chance of progressing, I would expect Jupp Heynckes to set up his side to hit the Gunners on the break.

Bastian Schweinsteiger is a loss to the German club in this sense as he is a clever player knowing when to attack and join in on the break as well as playing the long and through passes as well. However, with Müller, Robben, Kroos and Mandzukic, there’s enough proven talent in the Bayern ranks to cope without their local hero. 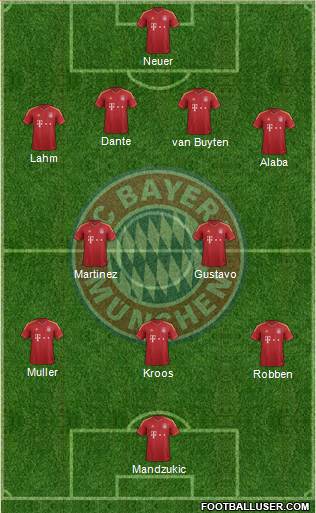 Do Arsenal have a chance of turning this tie around? Quite simply: no.

Here’s a graphic of stats I came across today that will only make Arsenal fans more nervous for the fixture in Germany on Wednesday:

Written by Barrie from PremiershipTips.com