Chelsea welcome Steaua Bucharest to Stamford Bridge on Thursday looking to keep their Europa League hopes alive. Here’s a preview with team news for the game.

Chelsea welcome Steaua Bucharest to Stamford Bridge on Thursday night looking to keep alive their hopes of lifting the Europa League this season.

The Blues will have to overturn a 1-0 deficit after tasting defeat in the first leg last week but Rafa Benitez has promised to name a strong side for the game as he aims to progress to the last 8.

Chelsea head into the game following Sunday’s superb comeback against Manchester United in the FA Cup last weekend. The Londoners trailed 2-0 at half-time but second half goals from Eden Hazard and Ramires earned a 2-2 draw and the two sides will now face a replay at the Bridge on April 1st.

While Chelsea will no doubt be eager to qualify for the next stage tonight, if they do it will just add more games to an already packed fixture list that could see them play four games in just 8 days.

Spanish striker Fernando Torres will come in for Demba Ba with the Senegalese hitman ineligible after playing for former club Newcastle in a previous round.

Captain John Terry is likely to return to the starting line-up while John Obi Mikel and Eden Hazard are also expected to return after their game-changing substitute appearance’s against United last time out.

Benitez has no fresh injury concerns meaning midfielder Oriol Romeu is the only player unavailable.

Steaua boss Laurentiu Reghecampf  has been boosted by the return of Macedonian defender Daniel Georgievski who is likely to come in after making a comeback from injury during the weekend during a 4-3 win over Ceahlaul Piatra.

Stefan Nikolic is also pushing for a start after recovering from a knee injury. 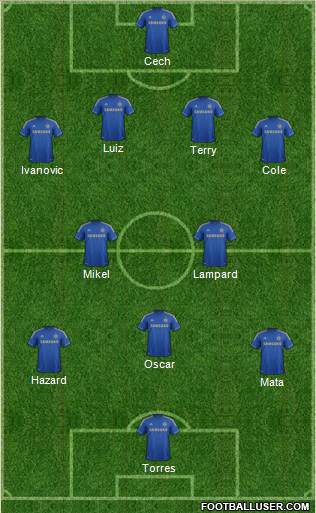 Steaua will arrive in the capital full of confidence after last weeks 1-0 win and will no doubt look to protect their lead, but I can see the Blues having too much for them to contend with at home and predict Chelsea to creep through to the quarter finals. Chelsea 2-0 Steaua

What would be your starting line-up and whats your score prediction for the game? Get involved in the comments section below.