Tottenham Hotspur are in Switzerland to face Basel in the second leg of their Europa League quarter final clash on Thursday night. Here’s a preview for the game

Tottenham Hotspur are in Switzerland to face Basel in the second leg of their Europa League quarter final clash on Thursday night.

The tie is finely poised after a 2-2 draw at White Hart Lane in the first leg last week, where Spurs needed goals from Emmanuel Adebayor and Gylfi Sigurdsson to get them back on level terms after Basel had stormed into a 2-0 lead.

Andre Villas-Boas men followed that up with another dramatic 2-2 draw at the Lane on Sunday, when Sigurdsson was on hand once again to salvage a point against Everton and keep them on course for a top-four finish in the Premier League.

While the north Londoners are desperate to secure Champions League football for next season, it’s the Europa League they have to concentrate on this evening and will face a tough task against an impressive Basel outfit.

The Swiss side have won their last four games at home and knocked out Zenit St Petersburg in the previous round, so will be full of confidence tonight.

Tottenham have their injury problems heading in to the game and boss AVB will have to make do without the services of several first team players.

Arguably the most important is Gareth Bale with the in-form Welshman ruled out with an ankle injury picked up in the dying seconds of the first leg. Aaron Lennon is also out with a knee injury and he joins William Gallas and Jermain Defoe on the sidelines, but all four could be back to face Man City next weekend.

Defender Younes Kaboul came through an hour for the under-21’s unscathed but is still not being considered for first team duty just yet, while midfielder Sandro is out for the rest of the season with a knee injury.

Basel welcome back former Liverpool right-back Philipp Degen – who missed the first leg through injury. Cabral, Marco Streller and Park Joo-ho are also back in contention. 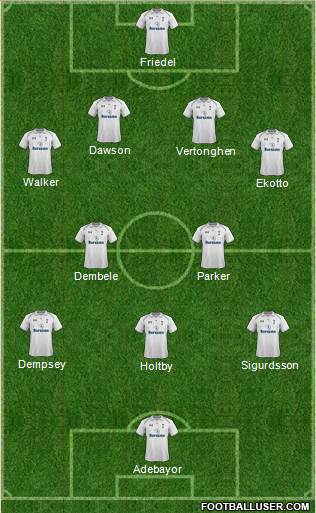 Basel looked a dangerous side at the Lane in the first leg and it’s going to be difficult for Spurs to prevent them scoring if they’re in that kind of form again tonight. But Tottenham didn’t play well during that opening 45 minutes and if they play as we know they can then AVB’s men can get a positive result and reach the semi’s. Basel 1-2 Tottenham

What would be your starting line-up and whats your predicted score for the game? Get involved in the comments section below.