Arsenal welcome Fenerbache to the Emirates tonight for the second leg of our Champions League play-off clash. Here’s a preview with team news for the game. Arsenal welcome Fenerbache to the Emirates tonight for the second leg of our Champions League play-off clash.

We boast a 3-0 lead from the first leg thanks to goals from Kieran Gibbs, Aaron Ramsey and Olivier Giroud so tonight’s game should be something of a formality. Fenerbache were a very poor side last week and we were comfortable winners in the end, so it’s going to be extremely difficult for the visitors to take anything away tonight.

We followed-up last weeks impressive display with another fine performance to secure a 3-1 away win at Fulham on Saturday, so we’ll be heading into the match full of confidence.

Arsene Wenger has already confirmed that ‘95% of the team’ will remain from the eleven that started at Craven Cottage. I would rather see us make a few more changes, especially with Tottenham up next, but I see why the boss doesn’t want to take any chances with a lucrative place in the Champions League group stages at stake.

Laurent Koscielny is back in the squad after being forced off in the first leg with a nasty cut but I’d expect him to be on the bench tonight.

Wenger has already confirmed that Jack Wilshere will start after being rested at Fulham so that may mean a rest for Aaron Ramsey or Tomas Rosicky. Nacho Monreal is likely to be the other change with the Spaniard needing game-time after recovering from a back injury that kept him out of much of pre-season.

Yaya Sanogo could feature at some point along with Emmanuel Frimpong and Serge Gnabry. We have no fresh injuries so the absentees are Abou Diaby, Mikel Arteta, Alex Oxlade-Chamberlain and Thomas Vermaelen. 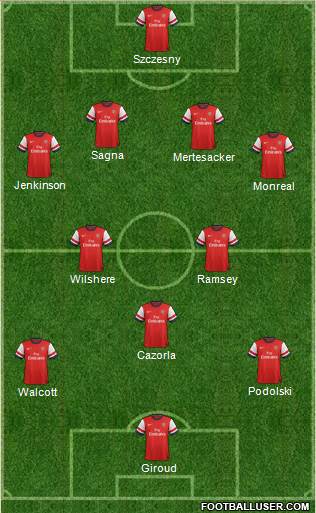 Arsenal 4-0 Fenerbache: If we play a similar side to that of last week, I see another easy win in store and safe passage to the group stages for the 16th consecutive season.

What would be your team and what’s your score prediction? Share your views below.