Top 5: New Signings To Watch Out For This Weekend

With the Premier League ready to restart on Saturday after the International break, Tom Gatehouse highlights the Top 5 new signings to look out for this weekend

There will be many a football fan that would have perceived the last week of international football as an irritation rather than a unifying, patriotic call-to-arms. Following the intense drama of the transfer deadline day, England’s last couple of World Cup Qualifying ties have really been a bucket of cold water on what was piping hot enthusiasm after the big-name signings for some of the Premier League’s top sides.

But with the wait almost up for the Premier League to grind back into action, here is a Top 5 of the new names to watch out for, for the first time this weekend and throughout the remainder of the season.

Liverpool’s deadline day signing from Sporting Lisbon, Ilori has been making the headlines all before he has even made his debut for the club. One of particular intrigue is the rumour that the London-born centre-back may be about to switch his international allegiance from Portugal to England. Liverpool, ever since the most recent days of Kenny Dalglish, have had a plethora of British stars on the books, and that number may be about to increase from this most unexpected of sources!

“Ilori was thrown in at the deep end (at Sporting) and looked a bit nervous. However, he has got better and better and looks like a classy centre-back, rather than a ‘Rambo’ type. More Ricardo Carvalho than John Terry, you could say,” said Kundert, quoted by talkSPORT.

Apparently, Ilori holds the Sporting Lisbon speed record in training, outdoing the likes of Cristiano Ronaldo and Nani. Quite a feat for a central defender! If he gets his chance, watch out for a red lightning bolt at the back for Liverpool in their match against Swansea on Monday!

Fans of the Premier League will be very familiar with the bouffant-haired, Belgian destroyer, after the five years he spent with Everton. Fellaini is one of the best utility men in the business, with the 25-year-old wholly adept to playing anywhere down the spine of the team.

United themselves were on the end of a savage beating from the former Standard Liege man on the opening day of the 2011-12 season. Fellaini played up top in that game, and put in a ‘Didier Drogba style’ performance, battering the United defense into submission, and scoring the only goal of the game.

The Champions are in dire need of a spark in midfield, and it will be interesting to see how Fellaini fits into David Moyes’ side. With shades of Yaya Toure noticeable in the big man’s all action displays, Fellaini may well be the engine that United sorely crave; starting with the early kick-off on Saturday against Crystal Palace at Old Trafford.

Much has been said of Tottenham’s huge outlay in this summer’s transfer window, and of the signing of Roma’s attacking midfielder, Erik Lamela for £25.8m. But their simultaneous capture of Danish attacker, Christian Eriksen, should garner just as much excitement. Snapped up for a bargain £11m, the 21-year-old is one of the game’s rising stars, and will add further menace to a lethal looking Spurs frontline.

English fans will remember him from the international friendly match against Denmark in 2011, where England ran out 2-1 winners in Copenhagen. The then 18-year-old Eriksen was voted man-of-the-match in what was a devilish display of raw attacking intent and guile. Rio Ferdinand and Frank Lampard spoke of their admiration for the youngster after the game, who cracked a shot against the foot of an England post, and generally terrified the defense from start to finish.

His progress through the ranks had been closely monitored by many of European football’s top sides, and Dutch legend, Johan Cruyff is a fan. He explained in an interview in 2010,

“He’s a player I really like with all my heart. This prize [Dutch Football Talent of the Year] is just the beginning, a stimulus to get the maximum out of his career. The talent is there, the recognition also; now it is up to the player himself. He is a typical product of the Danish school. You can compare him with Brian and Michael Laudrup. Only time will tell if Eriksen can reach the same level as them.” [source: talkSPORT]

Eriksen now has his chance to prove he can roll with the big boys, and he will surely make Spurs an even more fluent attacking outfit with his obvious talent. Keep an eye out for the youngster on Saturday at White Hart Lane, as Tottenham take on Norwich. 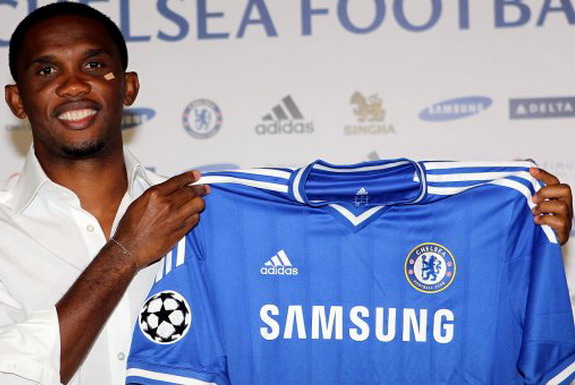 The well-travelled Cameroonian, Eto’o, didn’t seem particularly inclined to join the Blues, judging by his rather amusing quote after the first leg of the Champions League quarter final between Chelsea and Barcelona,

“I’d rather sell groundnuts in my village than to play for a pathetic team like Chelsea” [source: Daily Mail]

Funny how things turn out! Now the 32-year-old, fresh from being the highest paid player in the world while in Russia, arrives at Stamford Bridge at a time of real insecurity up top for the Blues. With Chelsea sending Romelu Lukaku on loan to Everton (Chelsea’s next opponents in the afternoon kick-off on Saturday) for the rest of the season, Jose Mourinho was left with the misfiring Fernando Torres and the unconvincing Demba Ba as his only senior strikers.

Eto’o, while being the wrong side of thirty, is known as being one of the most gifted predatory strikers of the modern age. With cat-like agility, and a merciless instinct in front of goal, the former Inter and Barca striker seems like a superb free transfer for the club. While doubts remain over his current pace, and his, at times, questionable attitude; Samuel Eto’o still has a good few years left in him.

He will be relishing the chance to link up with his former boss, as well as the plethora of attacking service he will be afforded from the club’s stunningly talented midfield. Chelsea certainly look a formidable outfit. Ozil-mania has gripped the Premier League! Arsenal’s record-obliterating £42.5m signing has had Gunners fans cooing to the rafters, with excitement reaching fever pitch earlier on this week after his goal in the World Cup Qualifier for Germany against the Faroe Islands.

The jewel in the crown of a magical crop of young German attackers, Ozil netted a penalty after new Arsenal teammate, Per Mertesacker scored an earlier tap-in as the European giants cantered to a 3-0 win.

While Ozil is certainly the premier attraction for the weekend, it will be his overall contribution to the Gunners’ trophy ambitions this season that will be proof of his worth. Arsenal travel to Sunderland on Saturday afternoon; and the chance to watch Santi Cazorla and Ozil play in tandem will draw many an eye.

Cazorla is certainly looking forward to it,

“I am very happy that Ozil is here. He is a spectacular player and we are very lucky (that) we are going to learn alongside him,” the Spaniard told Spanish newspaper, ‘Marca’

“He is an important player and he is going to be very good for the team and the way we play. I hope he can help us fight against the big teams in the Premier League.”

Despite the pressure now on him, striker Olivier Giroud must be itching to get started with the two of them pulling the strings behind him!

What do you think? Who are you most looking forward to seeing this weekend? Let me know in the comments below!