Arsenal get their Champions League campaign underway on Wednesday as they take on Ligue 1 outfit Marseille. Here is a predicted starting eleven for the game.

Arsenal get their Champions League campaign underway on Wednesday night as they take on Ligue 1 outfit Marseille.

The Gunners warmed up for the game with a 3-1 win away at Sunderland on Saturday and while the match saw Mesut Ozil make an impressive debut, striker Olivier Giroud picked up a knee knock which makes him a slight doubt for the Marseille clash.

Arsene Wenger claims he’ll give the striker a late fitness test but the Frenchman is confident he’ll be fit. Ozil is also understood to be suffering from ‘tight muscles’ but he should also start.

The only change I foresee from the side that beat the Black Cats is the fit again Per Mertesacker coming in for Carl Jenkinson, with Bacary Sagna reverting to right back. Therefore this is my predicted starting eleven. 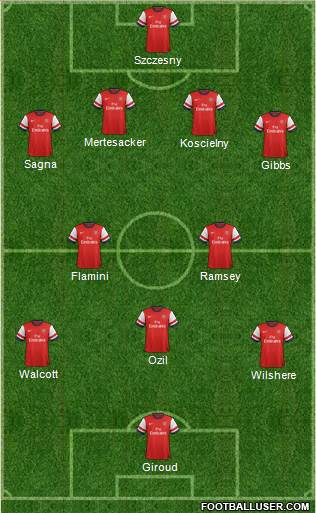 Jack Wilshere played out on the left on Saturday and is likely to do so again with the Arsenal squad decimated by injuries. Santi Cazorla is out for up to four weeks while Lukas Podolski, Alex Oxlade-Chamberlain and Tomas Rosicky are also missing, leaving Wenger with few options on the left side of midfield.

He could opt to play full-back Nacho Monreal further forward but I think he’ll stick with the side that impressed at Sunderland, and this team is ore than capable of getting a positive result in France.

What would your starting eleven be for the game? Share your suggestions below.