Chelsea kick off their 2013/14 Champions League campaign on Wednesday night when they welcome FC Basel to Stamford Bridge. Here’s team news and a predicted team

Chelsea kick off their 2013/14 Champions League campaign on Wednesday night when they welcome FC Basel to Stamford Bridge.

It will be Jose Mourinho’s first European game since returning to west London and he’ll be keen to get off to a positive start against the Swiss champions.

Mourinho gave the clubs official website the latest team news on Tuesday afternoon and it seems the club have no fresh injury worries to contend with and he’s got a fully fit squad to choose from. The Portuguese coach did reveal that Frank Lampard and Oscar will start the game, saying:

‘No injuries at all. Everybody is fit,’

‘I just spoke with a couple of players individually about the game tomorrow. A couple of players know they are going to start, and the players I spoke to, I tell you, because they know. Lampard and Oscar, all the others I didn’t speak to.’

Chelsea lost 1-0 to Everton on Saturday so Jose may elect to make a few more changes. David Luiz was picked out for criticism for his performance at Goodison Park so Gary Cahill may come in to play alongside John Terry at the back.

Samuel Eto’o was also off-form on his debut so Fernando Torres could be restored to the starting line-up on Wednesday. Juan Mata has found himself on the bench during the opening games of the season and he was hauled off after just 60 minutes during a rare start on Saturday so the Spaniard may be the one to make way for Oscar in attack. Here is my predicted line-up for the Basel game: 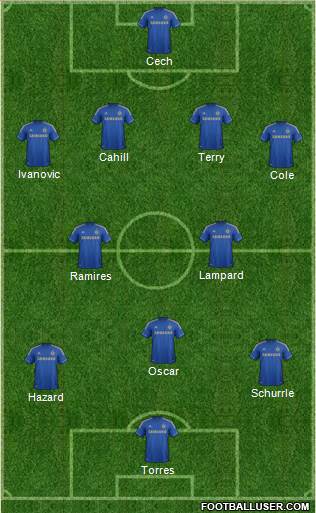 We’ll have a full match preview up on Wednesday, but for now let us know what your line-up would be for the game? Leave your suggestions below.