Chelsea kick off their 2013/14 Champions League campaign against FC Basel at Stamford Bridge on Wednesday night. Here’s a preview with team news for the match.

Chelsea kick off their 2013/14 Champions League campaign against FC Basel at Stamford Bridge on Wednesday night.

It’s six years to the day since Jose Mourinho was sacked as Chelsea boss following a 1-1 draw against Rosenborg and the Portuguese coach will be looking to get his second spell in charge at Stamford Bridge off to a more positive note in Europe this evening.

Mourinho led the Blues to two semi-final appearances during his first spell in charge but will be hoping this is the year he lifts the Champions League for the third time having previously won it with Porto and Inter Milan.

Chelsea fell at the first hurdle last season, becoming the first defending champions to be knocked out at the group stages, but Rafa Benitez ended up leading the team to glory in the Europa League with victory over Benfica in the final last May.

The west Londoners have been handed a kind draw after being placed in Group E alongside tonight’s opponents FC Basel as well as Schalke and Steaua Bucharest, so they will be confident of making it to the knockout stages this time around.

Basel have plenty of Champions League experience but were dispatched 5-2 by Chelsea in last seasons semi finals of the Europa League, so the Swiss champions will be hoping to make more of a game of it tonight.

Chelsea will be without midfielder Ramires who misses out through suspension having been sent off in last months European Super Cup defeat to Bayern Munich.

John Obi Mikel is likely to start in midfield alongside Frank Lampard – who is a confirmed starter along with Brazilian playmaker Oscar.

Mourinho could hand a debut to attacker Willian as he looks to make changes following a 1-0 loss to Everton on Saturday. Fernando Torres could also be in line for a recall after dropping to the bench in favour of Samuel Eto’o at the weekend.

Basel will be without midfielder Serey Die and Mohamed Elneny for the clash but coach Murat Yakin with Marco Streller and Mohamed Salah up front. 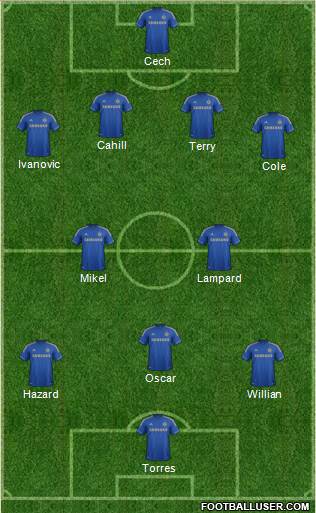 Eden Hazard: The Belgian international had a rare off day against Everton on Saturday but when he’s on form he’s almost unplayable. He’s due a performance and we’ve picked him as the one to watch tonight.

Chelsea 3-0 Basel: Chelsea are formidable in Europe at home and Basel have a poor away record, so we can only see one winner here.