Tottenham get the group stages of their Europa League campaign under way tonight as they welcome Tromso to White Hart Lane. Here is our predicted starting XI.

Tottenham get the group stages of their Europa League campaign under way tonight as they welcome Tromso to White Hart Lane.

Boss Andre Villas-Boas will be without summer signing Etienne Capoue after the midfielder picked up an ankle injury against Arsenal earlier this month. Aaron Lennon is also still missing with a foot injury while Nacer Chadli has joined them in the treatment room with a thigh strain.

Villas-Boas is likely to shuffle his pack for the game with the likes of Friedel, Naughton, Kaboul and Fryers coming in to the back five. Midfielder Sandro is also expected to be given a start as he continues to work his way back to full fitness following a serious knee injury.

Erik Lamela could be handed his first start since joining from Roma while Jermaine Defoe will spearhead the side in place of Spanish striker Roberto Soldado.

Here is our predicted starting eleven for the game: 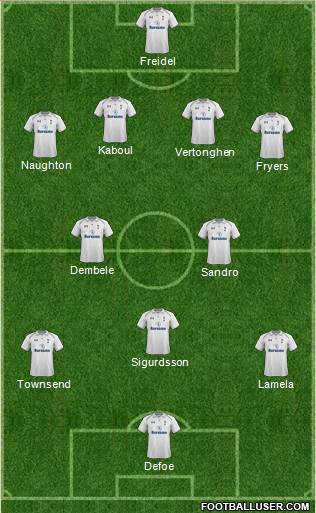 What would your starting team be? Share your views below.