Liverpool travel to the south coast to take on Championship side Bournemouth in the fourth round of the FA Cup on Saturday lunchtime. Here’s a predicted team.

Liverpool travel to the south coast to take on Championship side Bournemouth in the fourth round of the FA Cup on Saturday lunchtime.

Brendan Rodgers is expected to rest some of his key men ahead of Tuesday’s crucial Merseyside derby at Anfield that could well go a long way to determining who finishes in the top four this season.

It means star strikers Luis Suarez and Daniel Sturridge are likely to be kept in reserve with Iago Aspas tipped to lead the line up front. Victor Moses is almost certain to be given a run-out while Phillipe Coutinho may be given a chance to impress after some below par display’s lately.

Highly-rated midfielder Luis Alberto should also start in midfield with Steven Gerrard expected to be given a breather while Joe Allen could come in for Jordan Henderson with Lucas Leiva ruled out with a knee injury.

Rodgers has some decisions to make at the back with his options limited by injuries to Daniel Agger, Jose Enrique and Mamadou Sakho. Jon Flanagan returned to training this week so could feature with Martin Kelly potentially moving to the center of defence if Rodgers wants to rest Martin Skrtel.

Brad Jones will get a rare start in goal with Simon Mignolet rested. Here is my predicted line-up: 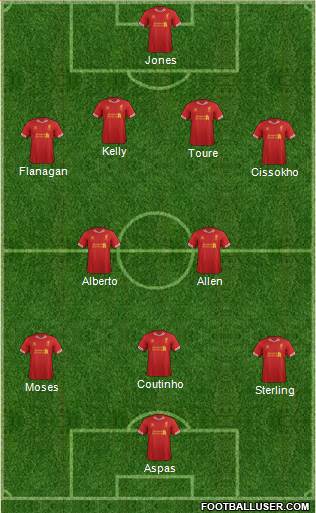 What do you think of our line-up? What team would you play? Shae your views below.