Arsenal play host to Coventry City at the Emirates tonight in the fourth round of the FA Cup. Here’s a preview with team news, likely line-up and prediction.

Arsenal play host to Coventry City at the Emirates tonight in the fourth round of the FA Cup.

We eased past north London rivals Tottenahm Hotspur 2-0 in the previous round thanks to goals from Santi Cazorla and Tomas Rosicky, and have been handed a reasonably kind draw as we face League One opposition at home.

This game should provide Arsene Wenger with a good opportunity to rest some of his key players ahead of Tuesday’s Premier League clash with Southampton, although he has hinted he wont be taking the game lightly as he wants to avoid against a repeat of last years shock that saw us crash out to Blackburn.

Coventry arrive in the Capital sitting mid-table in League One and boast a decent away record, winning 5 of their 12 games on the road.  However, we’re the Premier League leaders and are in excellent form ourselves, so even with a weakened team, we are rightly considered as the heavy favourites to go through to the fifth round.

Arsene Wenger confirmed on Thursday that Aaron Ramsey, Tomas Rosicky and Mikel Arteta all remain out through injury, so our midfield options are rather limited.

This means that Jack Wilshere and Mathieu Flamini are expected to start their third game in succession together, although highly-rated youngster Gideon Zelalem could be given a chance to impress.

Nicklas Bendtner has trained this week after recovering from an ankle injury and is expected to start up front with Olivier Giroud rested. Mesut Ozil and possibly Santi Cazorla are also likely to be given a breather.

Thomas Vermaelen remains out with a knee injury so it’s likely that Per Mertesacker and Laurent Koscielny will start in defence, while Kieran Gibbs should replace Nacho Monreal at left-back and Carl Jenkinson is expected to be handed a rare start on the right.

Lukasz Fabianski will start in goal while Alex Oxlade-Chamberlain and Lukas Podolski should get their first starts since returning from injury lay-offs. 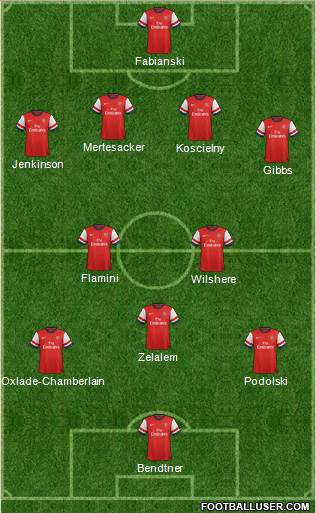 Nicklas Bendtner: The Danish hitman will have to be up for this game tonight and prove he’s hungry to make an impact in the first team. Arsenal’s play relies on a target man up front being available for intricate one-two’s, so hopefully Bendtner can prove he’s up to the task. I’m going to back him to get on the score-sheet.

Arsenal 3-0 Coventry: I expect the visitors to put up a good fight but in the end we should have way too much for them, despite playing a weakened side.