Chelsea entertain fellow Premier League outfit Stoke City at Stamford Bridge on Sunday in the fourth round of the FA Cup. Here’s our predicted starting line-up.

Chelsea entertain fellow Premier League outfit Stoke City at Stamford Bridge on Sunday afternoon in the fourth round of the FA Cup.

The Blues eased into this stage of the competition thanks to a 2-0 win over Derby County in the third round but will likely face a sterner test this weekend against Mark Hughes’ Stoke team.

Jose Mourinho confirmed this afternoon that striker Fernando Torres has been ruled out for at least three weeks with a knee injured picked up during last weeks 3-1 win over Manchester United.

This could see Demba Ba given a chance to impress with Mourinho declaring ‘it’s time for Demba’ at his pre-match press conference. However, the Portuguese coach may find it difficult to leave out Samuel Eto’o after his excellent hat-trick last week.

New signing Nemanja Matic made a late substitute appearance against United and is expected to start this weekend while Frank Lampard should also return to the starting eleven.

Jose is likely to rest Petr Cech, Cesar Azpilicueta and John Terry meaning Mark Schwarzer, Ashely Cole and David Luiz could come in while Branislav Ivanovic should retain his place after returning from injury last time out.

Eden Hazard and Oscar are two others who get be given a breather if Mourinho opts to rest more of his first team ahead of Wednesday’s clash against West Ham. 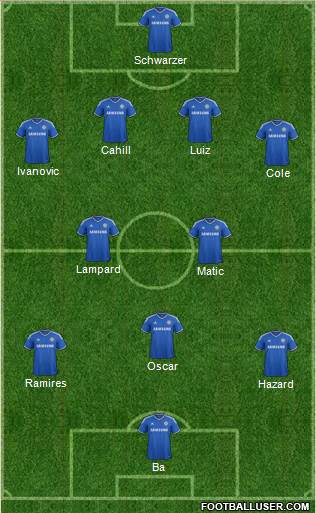 What do you think of our team? What line-up would you go with? Share your suggestions below.