Tottenham Hotspur take on Hull City at the KC Stadium on Saturday afternoon. Here is the latest team news and a predicted starting line-up for the game.

Tottenham Hotspur take on Hull City at the KC Stadium on Saturday afternoon with the north Londoners looking to bounce back after Wednesday’s 5-1 thrashing to Manchester City.

Tim Sherwood could decide to mix things up following the defeat at White Hart Lane and he’ll be forced to make at least one change if Danny Rose’s appeal against his sending off is dismissed by the FA.

Should Rose be banned, Jan Vertonghen could find himself recalled after returning to training last week with Kyle Naughton the alternative for Sherwood if he feels the Belgian isn’t ready.

Paulinho may also return to the starting line-up with Mousa Dembele possibly making way after being replaced at half-time in midweek, while young midfielder Nabil Bentaleb could also drop out for Etienne Capoue – as long as the Frenchman is still at the club following reports of a move away before Friday’s deadline.

Sherwood may opt to revert back to 4-4-2 – a formation that served him well during is opening weeks in charge – with Roberto Soldado returning alongside Emmanuel Adebayor in attack. 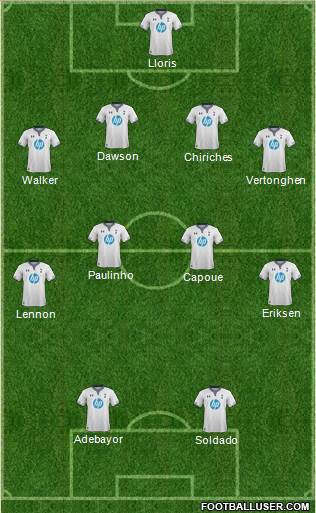