Predicted Liverpool Starting XI To Take On WBA – Sterling To Keep His Place?

Liverpool take on West Bromwich Albion on Sunday afternoon looking to cement their place in the top four. Here’s the latest team news and predicted line-up.

Liverpool take on West Bromwich Albion on Sunday afternoon looking to cement their place in the top four.

The Reds head into the weekend action sitting three points clear of Tottenham Hotspur in fourth so can extend that advantage as well as close the gap on third placed Chelsea to just a single point with victory at the Hawthorns.

Brendan Rodgers will be disappointed not to have added to his squad during the January transfer window, so no new signings will be on show this weekend.

With Glen Johnson, Daniel Agger, Jose Enrique and Mamadou Sakho all still injured Rodgers is expected to stick with the same back four that started during the clubs 4-0 win over Everton in midweek.

That means young Jon Flanagan is likely to continue to play ahead of Martin Kelly at right back while Aly Cissokho will deputise for Enrique on the left.

Lucas Leiva is also on the sidelines so Jordan Henderson will most likely start alongside Steven Gerrard in midfield, although Joe Allen is now back in contention after recovering from an abductor injury.

The front four is also expected to remain unchanged after such an impressive outing at Anfield against their Mersey rivals on Tuesday. The only possible change could see Victor Moses come in for Raheem Sterling, but we think the youngster did enough to keep his place.

So here’s our predicted line-up: 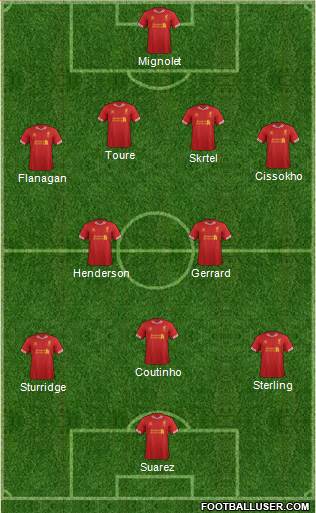