Manchester United entertain Fulham at Old Trafford on Sunday afternoon with the champions looking to bounce back from last weeks 2-1 defeat to Stoke City.

David Moyes has been dealt a blow with the news that Jonny Evans has been ruled out after being forced off last week with a calf problem. However, Nemanja Vidic returns from suspension and is expected to replace the Irishman in defence.

Phil Jones was also stretchered off against Stoke after suffering concussion following a clash of heads, but he’s expected to be passed fit and could play alongside Michael Carrick in midfield with Tom Cleverley likely to drop out.

Wayne Rooney and Robin van Persie came through last weeks game unscathed so should once again start this weekend with Juan Mata and Antonio Valencia likely to join then in attack, although Adnan Janujaz and Ashley Young are also pushing for game-time.

Here’s the team we think Moyes could go with: 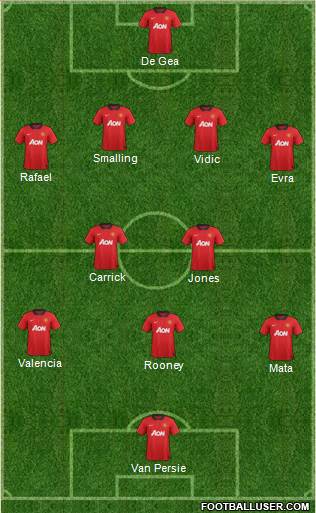 United head into the weekend action sitting seventh in the Premier League table – a full seven points off fourth-placed Liverpool – but will be hoping to close the gap with victory over a beleaguered Fulham side this weekend.