Chelsea take on WBA at the Hawthorns on Tuesday night looking to extend their lead at the top of the Premier League table. Here’s our predicted line-up.

Chelsea take on West Bromwich Albion at the Hawthorns on Tuesday night looking to extend their lead at the top of the Premier League table.

Jose Mourinho confirmed at his press conference on Monday afternoon that John Terry remains out with a muscular injury that kept him out of Saturday’s 3-0 win over Newcastle United. David Luiz is therefore likely to continue alongside Gary Cahill at the back but the skipper is expected to return to face Manchester City in the FA Cup this weekend.

Fernando Torres is back in contention after recovering from a knee injury but he may be used as a substitute before potentially starting against City if he proves his match sharpness. This could see Samuel Eto’o retain his place in attack against the Baggies.

January signing Mohamed Salah made an impressive cameo appearance at the weekend so could be handed his full debut tomorrow with Willian likely to drop out, while Ramires should return in midfield in place of Frank Lampard. 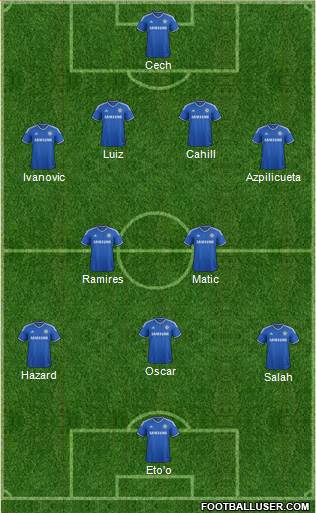 Chelsea moved to the top of the Premier League table at the weekend after seeing Arsenal slip up away at Liverpool while Man City were also held at Norwich, and with the two fellow title hopefuls not playing until Wednesday night, the Blues have the chance to open up a four point advantage and really put the pressure on their rivals.