Liverpool take on Fulham at Craven Cottage tomorrow night looking to cement their place in the top four, here is our predicted Reds team for the big game.

Liverpool take on Fulham at Craven Cottage tomorrow night looking to cement their place in the top four, here is our predicted team for the game.

Boss Brendan Rodgers confirmed on Monday that defensive duo Daniel Agger and Glen Johnson are both back in full training and could return to the squad on Wednesday.

Agger hasn’t played in over a month due to a calf injury and although his return will be a major boost to Liverpool, I don’t think Rodgers will rush him back in to the starting eleven just yet so Martin Skrtel and Kolo Toure are likely to continue at the heart of defence.

Johnson was given the last three weeks off due to niggling ankle and groin injuries but is also unlikely to start despite returning to full training, which will see young Jon Flanagan retain his place at right-back while Jose Enrique and Mamadou Sakho remain out through injury.

Rodgers is unlikely to make too many changes from the side that thrashed Arsenal on Saturday. In fact, we can see the Northern Irishman naming an unchanged side. The front six were exceptional at the weekend so all deserve to keep their places.

Here is the line-up Rodgers is likely to go with: 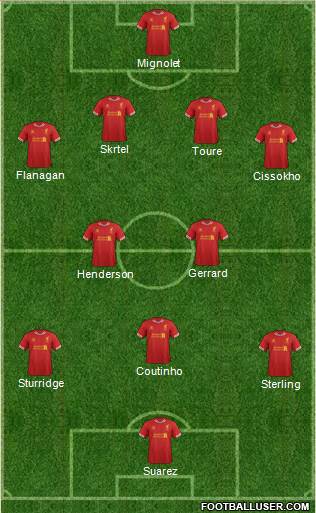 The Reds head into the midweek fixtures following Saturday’s 5-1 win over the Gunners which saw them not only open up a three point gap from fifth place Tottenham, but also see them close to within four points of third-placed Man City, so Rodgers may now have eyes on a prize a little sweater than just securing Champions League football.