Manchester United will be in the capital on Saturday evening to take on Crystal Palace side at Selhurt Park. Here’s the latest team news and predicted team

Manchester United will be in the capital on Saturday evening to take on Crystal Palace side at Selhurt Park.

David Moyes says the club have enjoyed their warm-weather training in Dubai this past week and thinks his squad are now rejuvenated as they go into the final 12 games of the season.

Defender Jonny Evans will once again miss out as he continues to nurse a calf injury and he’s likely to be joined on the sidelines by Rafael after the right-back suffered concussion against Arsenal last week.

However, Phil Jones is expected to be in contention after recovering from a calf problem and he could slot into central defence alongside Nemanaj Vidic with Chris Smalling moving to right-back.

Forward Danny Welbeck is also still out with a knee injury but Marouane Fellaini could return to the starting eleven after being named among the subs last time out. Should the Belgian international get a recall, he’ll start alongside Michael Carrick in midfield.

Moyes is likely to stick with Juan Mata on the left and Wayne Rooney in the ‘hole’ behind Robin van Persie while Antonio Valencia could get the nod over Adnan Januzaj on the right. 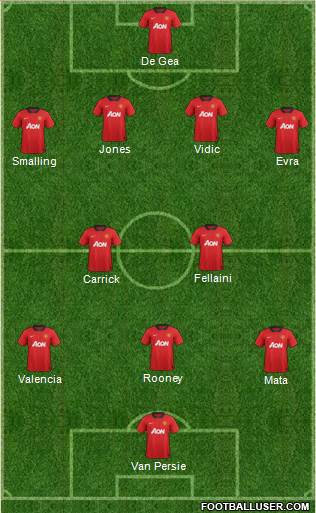 United head into the weekend action sitting seventh in the Premier League and Moyes will be desperate for a win to try and close the gap on the top four, which currently stands at 11 points.

What do you make of the team? What eleven would you pick?