Liverpool welcome Swansea City to Anfield on Sunday afternoon looking to cement their place in the top four. Here’s our predicted starting eleven for the game.

Liverpool welcome Swansea City to Anfield on Sunday afternoon looking to cement their place in the top four.

Brendan Rodgers men should be refreshed as they haven’t played this week so there is no reason the Northern Irishman should make too many changes to his team.

The Reds have been boosted by the return of defender Glen Johnson who’s back in the squad after a month out to recover from niggling injuries, and the 29-year-old should regain his place at right-back.

Youngster Jon Flanagan has deputised for Johnson in recent weeks and he’s been hugely impressive so Rodgers may decide to switch him to left-back in place of the inconsistent Aly Cissokho.

Otherwise, Liverpool should line-up as they’ve done recently. Daniel Agger made a successful return to action last week against Arsenal so should retain his place ahead of Kolo Toure.

Jordan Henderson will continue to play with a cast after having surgery on a broken wrist while Raheem Sterling and Philippe Coutinho should keep their places in attack alongside the deadly duo of Daniel Sturridge and Luis Suarez.

Lucas Leiva, Mamadou Sakho and Jose Enrique remain on the sidelines though injury. 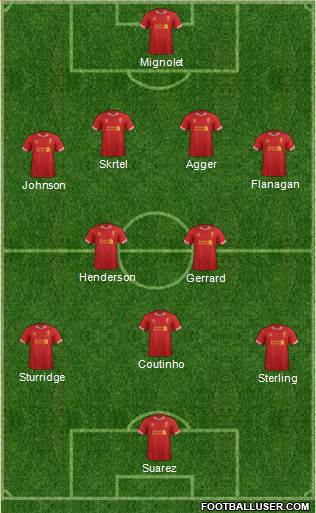 What do you think of our team? Who would you like to see start?