Chelsea take on Fulham on Saturday afternoon looking to extend their lead at the top of the Premier League table, here’s our predicted team for the game.

Chelsea make the short trip across west London to take on Fulham at craven Cottage on Saturday afternoon, here’s our predicted team for the game.

Jose Mourinho is likely to make a couple of changes from the side that drew 1-1 with Galatasaray in the Champions League on Wednesday night.  David Luiz didn’t feature in that game because of injury so he could miss out again meaning the five five should remain unchanged.

January signing Nemanja Matic didn’t make the trip to Turkey as he was ineligible to play in Europe having already played for Benfica in the group stages, so he’s expected to come straight back in to the midfield.

He could be partnered by Ramires if the Brazilian is passed fit having received a blow to his nose on Wednesday, but he completed the 90 minutes against Gala so he should be okay to play this weekend.

Andre Schurrle is likely to make way with Oscar coming back in after he make a late appearance in midweek to prove he’s recovered from a minor ankle knock, while Fernando Torres is expected to keep his place up front after scoring the opening goal last time out.

Here’s the team we think Mourinho will put out: 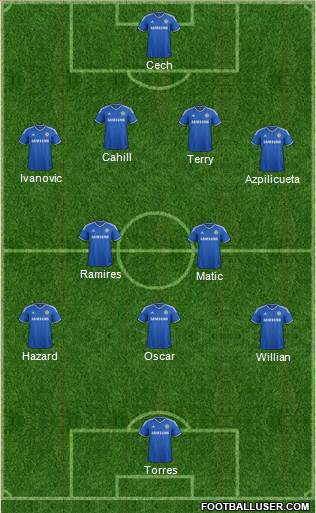 Chelsea will head into the weekend action sitting one point clear of Arsenal and will look to at least maintain that advantage with a win over their London rivals at Craven Cottage.