Man Utd get back to Premier League action as they take on West Brom at the Hawthorns on Saturday lunchtime. Here’s a preview with team news and prediction.

Manchester United get back to Premier League action as they take on West Brom at the Hawthorns on Saturday lunchtime.

The Red Devils have enjoyed an extended break after not playing since their 2-0 defeat to Olympiakos back on the 25th February, so David Moyes will be keen to get back on track and keep alive their faint hopes of finishing in the top four.

United head into the weekend fixtures sitting seventh in the league table and a full 12 points behind fourth-placed Manchester City – who have a game in hand – so the defending champions can not afford any more slip ups if they want to be playing Champions League football again next season.

They face a West Brom side who are hovering just above the relegation zone with just a single point separating them from 18th-placed Sunderland, so Pep Mel will be desperate to pick up his first win since taking charge.

The Baggies are looking to pull off an unexpected double over United having won the reverse fixture 2-1 at Old Trafford earlier in the season, while this fixture last season ended in a thrilling 5-5 draw in what was Sir Alex Ferguson’s last game in charge.

West Brom will continue to be without defender Diego Lugano as he recovers from a knee injury, but Claudio Yacob is hoping for a recall after recovering from a hamstring strain.

Stephane Sessegnon is also close to making a comeback from a groin injury while Billy Jones is hoping to shake off a hamstring problem to start at right-back. Nicolas Anelka is suspended after being handed a five-match ban for his controversial goal celebration.

Man Utd will be without Javier Hernandez after he picked up a knee injury while playing for Mexico in midweek. The striker joins Phil Jones and Nani on the sidelines with the duo still nursing thigh and hamstring injuries respectively.

Moyes is more hopeful that Jonny Evans might be fit after missing the last few weeks with a calf injury. Rafael is also pushing for a recall after sustaining concussion, while Robin van Persie is expected to be fit despite a doubt of sickness in midweek. 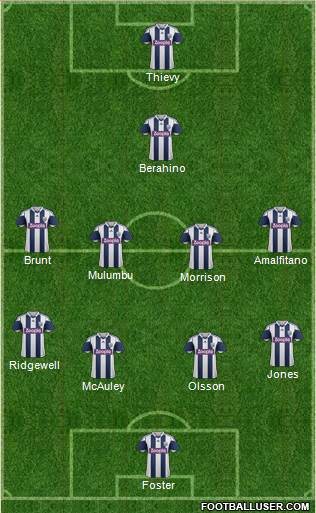 Wayne Rooney: The forward has an excellent record against West Brom, having scored six in his last five appearances against the Midlanders, and his link-up play between Juan Mata, Adnan Januzaj and Robin van Persie will be important tomorrow.

West Brom 0-2 Man Utd: The hosts are in poor form and although United are hardly firing on all cylinders themselves, we think they’ll still have too much for West Brom this weekend.