Arsenal are on their way to Germany ahead of Tuesday night’s Champions League second leg clash with Bayern Munich. Here’s our predicted line-up for the game.

Arsenal are on their way to Germany ahead of Tuesday night’s Champions League clash with Bayern Munich. Here’s our predicted line-up for the game.

Arsene Wenger isn’t expected to rest any of his key men, despite many feeling this tie is already beyond us having lost 2-0 at the Emirates in the first leg. The boss does have a couple of injury concerns to contend with in defence, with both Laurent Koscielny and Kieran Gibbs doubts.

Koscielny missed the 4-1 win over Everton on Saturday after feeling a tight hamstring while away with the France squad last week. However, the centre-back has travelled with the rest of the squad after training this morning and Arsene has already said he has a chance of featuring, so I think we’ll see him return alongside Per Mertesacker.

Gibbs limped off in the final few minutes of Saturday’s win with a tight calf but it isn’t thought to be serious. If he is ruled out, with Nacho Monreal still out with a foot injury, Arsene could either play Thomas Vermaelen at left-back or move Bacary Sagna across and bring Carl Jenkinson in at right-back.

We went with Mikel Arteta and Mathieu Flamini in the centre of midfield against Everton and with Jack Wilshere out for six weeks and Aaron Ramsey not yet ready to return, I think the boss will stick with this combination. Tomas Rosicky is pushing for a start though and could do a job in the middle if needed.

Alex Oxlade-Chamberlain, Mesut Ozil and Santi Cazorla were all in good form at the weekend and I think they will keep their places in the team, while Olivier Giroud is certain to return up front after coming off the bench to score twice on Saturday. 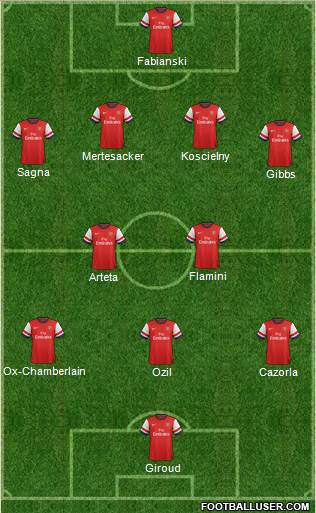 What do you think of my team? What team would you select for the game? Share your views below.