Chelsea take on Aston Villa at Villa Park on Saturday evening looking to extend their lead at the top of the Premier League table. Here’s out predicted team.

Chelsea take on Aston Villa at Villa Park on Saturday evening looking to extend their lead at the top of the Premier League table to a huge 10 points.

Jose Mourinho is expected to resist the temptation to rest his key men ahead of Tuesday’s Champions League second leg against Galatasaray, so we’re likely to see a virtually full-strength team put out as the west Londoners look to tighten their grip on the league title.

The back five is likely to remain unchanged from those that started during last weekend’s 4-0 win over Tottenham, although David Luiz could come back in if he passes a late fitness test. Cesar Azpilicueta is expected to keep his place at left-back meaning the fit again Ashley Cole will once again have to make-do with a substitute role.

Ramires is likely to drop back in to the centre of midfield while Nemanja Matic is almost certain to start as he’ll be ineligible to play in Europe in midweek.

Mourinho may opt to make a couple of changes in attack with Oscar and Willian coming back in, while Fernando Torres won’t be risked after picking up a groin knock during the warm up last Saturday. So Samuel Eto’o should continue in attack, although Demba Ba did his chances of a rare start no harm after coming off the bench to hit a late brace against Spurs. 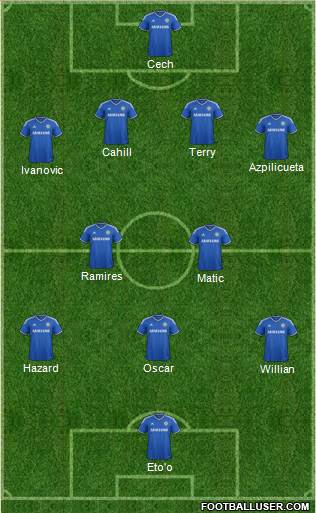 The Blues head into the weekend action sitting seven points clear at the top of the table and with many of their closest rivals playing each other on Sunday, Chelsea have a golden opportunity to extend their lead at the summit.

What team do you think Mourinho should go with? Should he rest players for Tuesday? Share your views below.