It’s no secret we head into the game with a whole host of injury problems to contend with, with Aaron Ramsey’s comeback put on hold after a minor set-back. He now joins Jack Wishere, Mesut Ozil, Theo Walcott and Abou Diaby in missing the game, while Yaya Sanogo faces a late fitness test.

The latest name to be sidelined is Ozil after he was ruled out for four-six weeks with a hamstring strain. The German has been under-fire in recent weeks but we’ve clearly got a huge void to fill in attack now and I think we’ll see Tomas Rosicky come in this weekend.

The Czech international is likely to join Santi Cazorla and Alex Oxlade-Chamberlain in the front three behind Olivier Giroud, with the trio all interchanging their positions throughout the game.

The Ox was excellent in a deeper role against Bayern Munich in midweek but I think Arsene Wenger will bring Mathieu Flamini in alongside Mikel Arteta to offer extra protection to the back-four, and these are the type of games the Frenchman thrives on. Let’s just hope he can avoid picking up any needless cards. Kim Kallstrom is back in the squad but highly unlikely to start.

The boss has confirmed that Nacho Monreal is available again after recovering from a foot injury so he’s favourite to start at left-back with Kieran Gibbs still considered a doubt. Wojciech Szczesny will come back in between the sticks despite Lukasz Fabianski impressing last time out.

So here’s the team I think we’ll see take on Spurs: 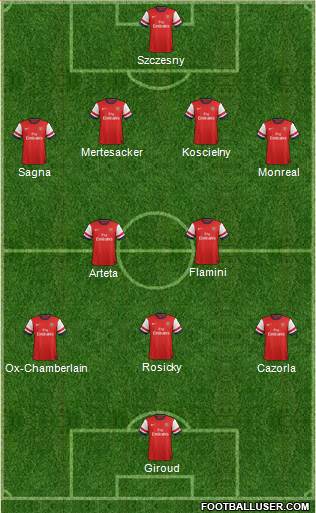