It was a potentially crucial weekend in terms of the title race, with Liverpool and Arsenal earning impressive wins. Do you agree with the Team of the Weekend?

It seems Liverpool have come to the boil at exactly the right time! Brendan Rodgers’ side have been milling around the top four for the majority of the season, but with punters keeping an eye on the Chelsea/Arsenal/Manchester City tussle, Liverpool have blindsided the lot of us and now lie just four points off the top, and with a game in hand.

The Merseysiders’ highly impressive 3-0 win at Old Trafford on Sunday put paid to Manchester United’s slim hopes of a Champions League berth next season, while simultaneously propelling Liverpool forwards to within touching distance of Chelsea at the Premier League summit.

The Blues slipped up against a spirited Aston Villa on Saturday, with Mourinho’s decision to keep the already-booked Willian on the pitch backfiring, with the Brazilian receiving his marching orders in the second half, and giving the impetus to Paul Lambert’s side to snatch victory.

Arsenal also took advantage of Chelsea’s loss, making up for lost ground with a hard fought 1-0 win over Tottenham in the north London derby, and are now equal on points with Liverpool.

Manchester City may yet trump them all however, as they are now only six points off the top, with three games in hand thanks to their 2-0 away win at Hull.

Here is the Football-talk Team of the Weekend for Game-week 30: 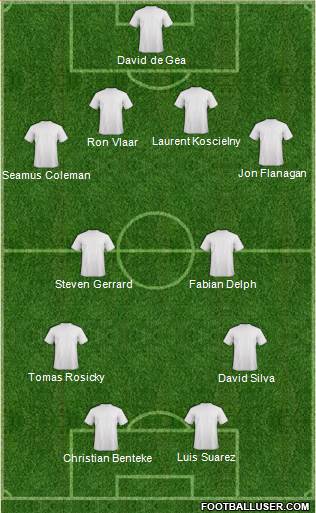 While many will be surprised at the Spaniard’s inclusion, considering his side’s 3-0 defeat at the hands of arch rivals Liverpool, his save from Luis Suarez in the second half is, for me, the save of the season so far. An extraordinary stop!

The flying full-back bagged himself another goal in the 2-1 win over Cardiff on Saturday, and was a powerful presence on the flank.

The Dutch defender was a key player for Villa in their shock 1-0 win over Chelsea, with the 29-year-old keeping the Blues at bay brilliantly, and marching out of defence to start off attacks.

The Frenchman was at his best against Spurs on the weekend, as he and Per Mertesacker dealt with everything their fierce rivals could throw at them, helping the Gunners to another clean sheet, and a crucial three points.

The young defender had to contend with the attacking ingenuity of Juan Mata and Adnan Januzaj among others on Sunday, and he passed the test with flying colours. Flanagan seems to improve with every game.

How Liverpool will miss him when he’s gone. Captain fantastic Stevie G came up with the goods once again at Old Trafford, scoring a brace of penalties, and keeping the midfield on lock throughout. Struck the post with a third spot-kick, but being denied a hat-trick was the last thing on his mind as the full-time whistle blew.

Big things were expected of the midfielder back in his Leeds days, with the likes of Arsenal linked with a move, but since joining Aston Villa in 2009, he has rarely hit the heights expected of him.

His performance against Chelsea on Sunday was as good as he’s been for Villa however, with the 24-year-old running the Blues ragged, and scoring the winning goal with a lovely improvised finish.

The Czech’s stunning strike in only the second minute gave Arsenal a crucial derby-day win over Tottenham, and kept their title hopes very much alive. What a hit!

The silky Spaniard scored the all-important opening goal for a shell-shocked City, who had captain Vincent Kompany sent off very early on. It was a victory of champions for Silva and his crew, and one that could have a big impact come May.

While the burly Belgian failed to get on the scoresheet against Chelsea, he was a real menace from the get-go, and came close with a number of efforts he had fashioned for himself. Ploughing a lonely furrow up top against Chelsea is no small matter, but he did it superbly.

Yet another goal for the Uruguayan, and it was a cooly taken one at that, one that put fierce rivals Manchester United down for good. Lively and full of dangerous running; would you bet against Suarez and co topping the table come the end of the season, if they can keep this kind of form up?

Goal of the Weekend: Tomas Rosicky vs Tottenham