Manchester United entertain Olympiakos at Old Trafford on Wednesday night looking to overturn a two-goal deficit to reach the quarter finals of the Champions League. Here’s the latest team news and predicted team.

David Moyes admitted earlier today at his press conference that Shinji Kagawa will be involved at some stage of the game, although it’s not clear whether the Japanese international will start. Kagawa has been on the fringes of the United first team this season so it would be strange for Moyes to suddenly trust him in arguably the most important game of the season, so we think the midfielder will be among the subs.

This will mean Adnan Januzaj is likely to continue on the left wing with Antonio Valencia expected to be recalled on the right in place of the ineligible Juan Mata, although Ashley Young and Nani are both in contention. Wayne Rooney will continue to support Robin van Persie in attack.

Despite United slumping to a disappointing 3-0 loss to Liverpool on Sunday, Moyes isn’t expected to make too many other changes. Rio Ferdinand is pushing for a recall in defence and may come in for Phil Jones, but we think he’ll stick with the same back four with Chris Smalling and Jonny Evans continuing to miss out through injury.

Here’s the team we think Moyes will go with: 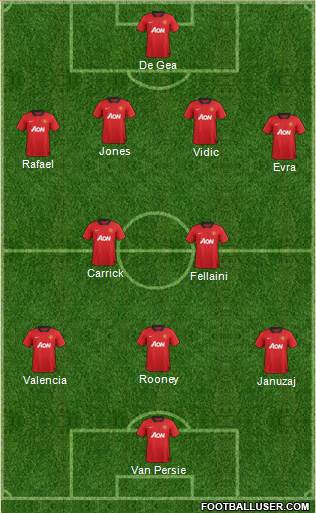