Liverpool will be in Wales to take on Cardiff City on Saturday afternoon looking to close the gap on leaders Chelsea. Here’s our predicted team for the game.

Liverpool will be in Wales this weekend to take on Cardiff City on Saturday afternoon looking to close the gap on leaders Chelsea. Here’s our predicted team for the game.

Much of Brendan Rodgers side picks itself these days with the Reds playing with quality and confidence, both of which were in full display last Sunday as the Merseysiders thrashed defending champions Manchester United 3-0 at Old Trafford, so I’m not expecting too many changes this weekend.

Centre-back Mamadou Sakho is back in contention after recovering from a hamstring strain that’s kept him out for over 10 weeks. The most likely to make way should Rodgers opt to start the Frenchman is Daniel Agger but I think we’ll see the Dane continue alongside Martin Skrtel, Jon Flanagan and Glen Johnson, with Sakho possibly coming on in the second half to get some minutes under his belt.

Lucas Leiva is another who’s pushing for a recall after recovering from a serious knee injury but again I think we’ll see Joe Allen retain his place alongside Steven Gerrard and Jordan Henderson in midfield. This would mean that Phillipe Coutinho will also have to make do with a place among the subs yet again.

The attack will stay as it has for much of the season with the dangerous trio of Raheem Sterling, Daniel Sturridge and of course Luis Suarez set to cause more havoc against Cardiff.

So here’s the side I think we’ll see Rodgers go with this weekend: 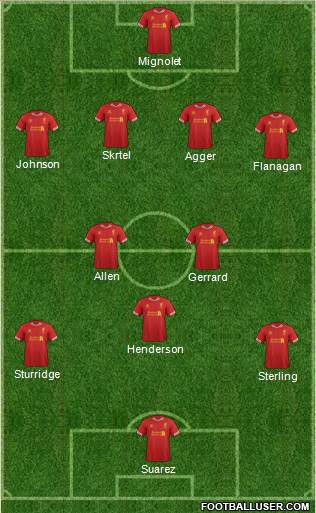 It would be harsh to drop any of the eleven that started against United so I wouldn’t be surprised if Rodgers named an unchanged line-up with the likes of Coutinho, Sakho and Leiva possibly coming back in for the home clash with Sunderland on Wednesday.