Arsenal take on rivals Chelsea on Saturday looking to close the game on the leaders to just one point. Here, Gooner Mac gives us his predicted team for the game

Arsenal make the short trip across London to take on rivals Chelsea on Saturday looking to close the game on the leaders to just one point. Here, Gooner Mac gives us his predicted team for the game.

Arsene Wenger’s options are severely limited due to the number of injuries he’s dealing with at present. The back-five that started and performed so well during our 1-0 win over Tottenham last week are almost certain to retain their places this weekend.

Nacho Monreal is fit again and came off the bench against Spurs but I think we’ll see Wenger stick with Gibbs at left-back, while Thomas Vermaelen will once again have to make do with a place on the bench as Koscielny and Mertesacker will certainly start this one.

I do think the boss might make one change to the midfield though. I can see Mathieu Flamini coming in alongside Mikel Arteta to offer more protection to the back-four with Alex Oxlade-Chamberlain moving out to the wing. The player most likely to make way is Lukas Podolski with Santi Cazorla playing on the left and last weeks match-winner Tomas Rosicky in the middle of the attacking three.

Olivier Giroud was below par against Spurs but I doubt Arsene will drop him for Yaya Sanogo against Chelsea, so the Frenchman is expected to lead the line once again.

With Jack Wilshere, Mesut Ozil, Theo Walcott and Aaron Ramsey still sidelined there is very little else Wenger can do to change things up, and you could argue he doesn’t need to after an impressive result at White Hart Lane last time out.

Here’s the team I think we’ll see put out this weekend:

You can see our predicted Chelsea XI here 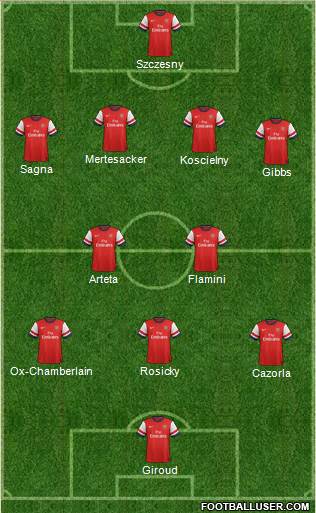